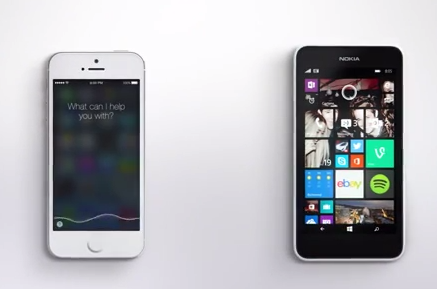 Apple certainly dominated the tweet streams and tech news headlines on Tuesday after announcing new iPhones, a new watch, and a new way to pay.

The latest ad, this time posted on Nokia’s YouTube page, features a forgetful Siri who can’t remember Cortana’s name. The point is to show off Cortana’s ability to remember a user’s habits and preferences over time.

“I can remember lots of things — like your favorite kinds of restaurants,” Cortana says.

“I cannot remember that,” Siri responds.

“I can remember appointments and help you get there on time,” Cortana says.

“Or that,” Siri responds.

“Or that either,” Siri responds.

Finally, Cortana wonders if Siri can actually remember anything.

“I remember when I was the only phone that talked,” Siri says, ending the commercial.

The video, posted Tuesday morning, has racked up nearly one million views in just 24 hours. That’s a far faster clip than the second-most recent Siri vs. Cortana ad that ran on Sept. 1, which currently has about 772,000 views.

One day earlier, the NokiaUS YouTube Channel posted a two-minute, 11-second ad titled “Siri & Cortana: Group Therapy” that featured unhappy Apple users who were let down by Siri because she “doesn’t understand a fucking thing about me.”

Microsoft has now run four different Siri vs. Cortana ads in the past two months, each accumulating a good chunk of views. Whether or not these digs at Apple convince customers that Cortana is a superior virtual assistant — and make them purchase a Microsoft device —  is another matter.