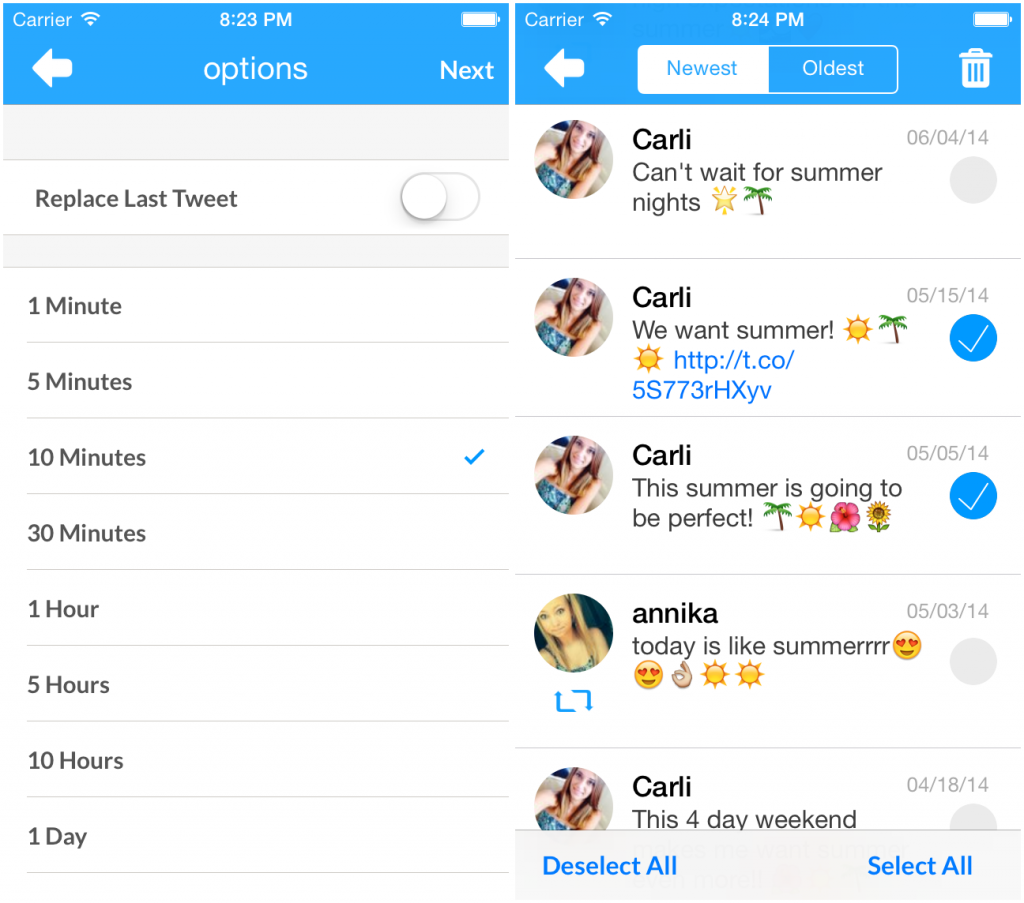 One of the hot trends in social media these days is ephemerality. Snapchat hit it big with its particular brand of timed picture messages, and other companies have tried to play catch-up to varying degrees of success.

Xpire, a free app for the iPhone, is designed to bring that same concept to Facebook and Twitter, two platforms that haven’t embraced the trend in their main products. The app allows users to create a post and then put it on a timer. After the set amount of time has elapsed, the post is deleted.

Users who want to cull their past posts can flip through a feed of all their updates, and easily delete all ones they’d like to ditch by checking boxes next to the posts and tapping a single button.

It’s a cool app that makes it easy to talk about sporting events as they’re happening, and then keep the chatter from cluttering your feed. After all, nobody really cares about up-to-the-minute commentary on World Cup matches half a day after they’re over. It’s the perfect app for gushing over Tim Howard’s superhuman performance without subjecting late-comers to a wall of old tweets.

It’s also a boon to people who want to control their messages on social media. If you want to post messages on the weekend about how much fun you’re having and make them disappear by the beginning of the work week, that’s totally doable.

Xpire isn’t a perfect solution for privacy, though. People can still take screenshots of posts that show up for a few minutes and preserve them forever. And while there may not be any concrete proof that you said something, people can still see and remember it.

There’s also the small problem of the app not working all the time. In order to delete any posts a user makes, Xpire needs to know the specific post ID for each so that it can go back and wipe the post after its time is up. If you quit the app before that happens (like GeekWire’s Todd Bishop and I did) the post will stay up unless you delete it manually.

In an email to GeekWire, Xpire creator Jesse Stauffer said that he has only heard a few reports of this happening, so it’s entirely possible that the bug I’ve experienced was just a fluke. But in the event a post absolutely must disappear, I’d recommend either deleting it manually or checking in to make sure that Xpire works as advertised.

Overall, Xpire is an easy-to-use, convenient app that’s great for posting on the go or at home. It’s not perfect, and I’m definitely going to keep using Tweetbot and Facebook’s Paper app for most of my posting, but it capably provides the service it sets out to offer.

Xpire is available for free from the iOS App Store.