Amazon.com introduced #AmazonCart earlier this month, giving customers an easy way to add items they see on their Twitter feed to an Amazon online shopping cart.

But is the new feature catching on with social media-savvy consumers?

Seattle-based startup Simply Measured perused the analytics and found that #AmazonCart was tweeted more than 157,000 times during the first two weeks of its existence.

Based on Simply Measured’s Twitter data, Amazon focused on driving awareness for the first week — as evident by the increase in retweets — and then turned its attention to customer adoption (more replies, mentions): 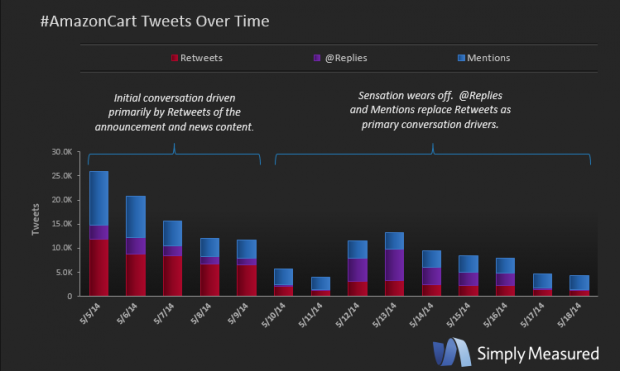 Simply Measured also noticed that the top product being tweeted was, perhaps surprisingly, a romance novel.

“In fact, several books made the list of top links,” wrote Simply Measured’s Kevin Shively. “This could be an amazing tool for publishers looking to reach and convert Twitter’s audience, which is basically on the network to consume content in one form or another.”

For the past few days, Amazon has used #AmazonCart liberally on its Twitter feed and multiple times per day. Here are a few:

It’s unclear how effective #AmazonCart has been for Amazon, which is not sharing any revenue with Twitter when people add an item to their cart via the social media service. We’ve reached out to the company to see if they have any statistics on the performance of the new feature.

At the very least, the early traction numbers show that marketing products and enabling purchasing through Twitter could be a nice way for Amazon to display its goods on places other than the company’s website.