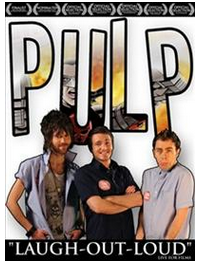 For the first time ever, a feature-length movie is debuting on Xbox Live.

Pulp is an indepedent British comedy about a struggling comic book store owner who, with his two “geek sidekicks,” unwillingly helps the police solve a crime. The film debuts today and it’s the first time a movie will be made available first to Xbox Live users.

BBC reports that director Adam Hamdy told BBC that he went with Xbox Live because it’s getting expensive and more risky to distribute straight to DVD. Microsoft also said it plans to distribute more films in the future.

You can expect to see more debuts of films on Xbox Live, as well as some original content from Microsoft. Last month, Microsoft’s Nancy Tellem fleshed out some details about the company’s new L.A.-based studio called Xbox Entertainment Studios. Tellem, president of entertainment and digital media at Microsoft, is overseeing operations at the studio, where Microsoft is trying to create more interactive content for the Xbox that “will change the way entertainment content is experienced and delivered,” according to the company.

Previously on GeekWire: Report: Microsoft to debut next-gen console in April after being “caught off guard” by Sony