When Spencer Rascoff first set up a treadmill desk inside the Zillow‘s Seattle HQ, lots of people made fun him. What the heck was this odd contraption? Why would you want to exercise while trying to do work?

But fast forward a few months later, and now there’s a line of Zillow employees waiting to use the treadmill desk. The machine has caught on so much that it’s created a culture of competition and encouraged people to buy step-trackers like Fitbits.

Rascoff, Zillow’s CEO, said that he was a bit wary of treadmill desks in the beginning. But he decided to give it a shot, and now he can’t stop walking while working.

“I love the treadmill desk,” said Rascoff, now a self-proclaimed treadmill desk addict. “I walk for a few hours a day now at a 2-MPH pace. It gives me more energy throughout the day and I don’t feel like a lazy slob at the end of a day of work. I do all my email and phone calls while I walk.”

[Related: Here’s why your next meeting should be spent walking, not sitting]

There seems to be somewhat of a treadmill desk movement going on, likely born from the popularity of standing desks. Much of that is due to recent studies showing both the positive impact of treadmill desks and the detrimental effects of sitting all day long, like many of us do at work. In fact, some doctors say excessive sitting is just dangerous as smoking.

Ron Wiener, founder of local startups like Earth Class Mail and EquaShip, knows about the benefits of treadmill desks. So much so, in fact, that he started workwhilewalking.com as a treadmill desk online store and a hub for treadmill desk reviews, advice and industry news.

Now, Wiener is launching something relatively novel this Friday: a physical retail store dedicated solely to treadmill and standing desks. Interested customers can bring in their devices and try out any workstation for 30 minutes. You can also buy extra rental time and that money can be credited to any equipment purchased within the year. 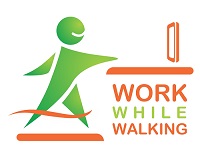 “As we’ve heard from our growing online community, many people hesitate before investing in a treadmill desk because they don’t know if they will be able to get used to typing while walking or standing,” Wiener said in a press release. “Since our mission is to drive broad acceptance of treadmill and standing desks across the corporate and work-from-home landscape, it made sense to find a way to eliminate this as an objection. We’re excited about this new trialing center and expect to expand across the US and beyond over the coming years.”

Walking while working is certainly a big change from the norm, but the effects of it — both mentally and physically — seem to be catching on with at least a few of us. Rascoff, though, isn’t quite ready to bring his work station into the next Zillow board meeting.

“I haven’t put treadmill desks into conference rooms for meetings,” Rascoff said. “That’s a step too far, I think.”