One of the original brands behind the Internet media revolution, RealPlayer, is making a push into the cloud era with a new service, RealPlayer Cloud, that aims to solve some of the toughest challenges involved in sharing and distributing videos online. 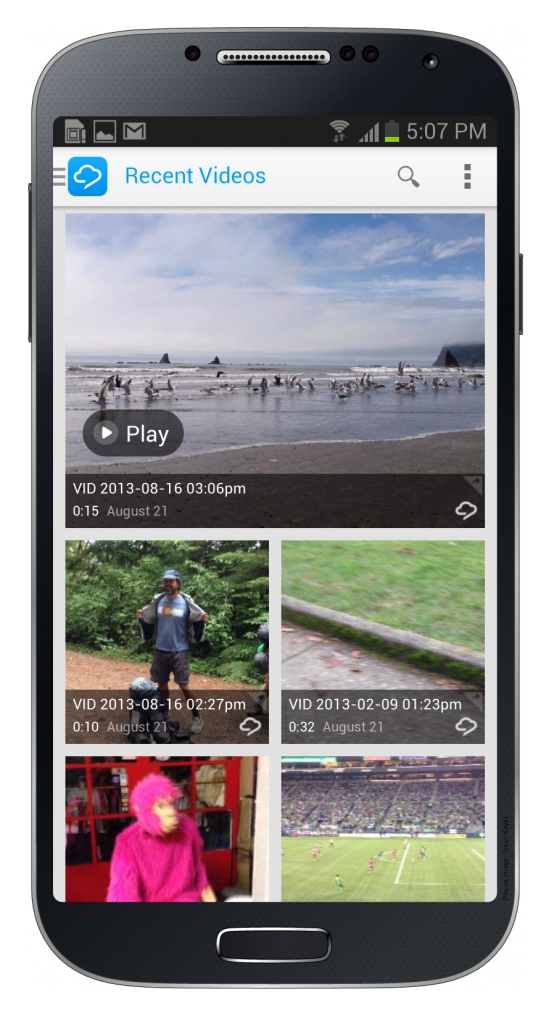 RealNetworks calls it the first integrated video player and cloud service. The Seattle-based company is launching the service tonight with the simultaneous release of RealPlayer Cloud apps for Android, iPhone, iPad, PC, Roku and the web.

RealPlayer, once a dominant digital media brand, still has 23 million monthly unique users, primarily from its flagship PC software, according to the company. The new RealPlayer Cloud service lets users upload videos for quick access a variety devices — creating a centralized dashboard of videos for personal use, and making it easier to share videos via email and social media.

The service leverages cloud storage and streaming rather than requiring users to send large video files as attachments via email. People who receive the videos from RealPlayer Cloud users won’t need a RealPlayer Cloud account to access them.

RealNetworks is counting on specialized video features — including automatic formatting for whichever device is being used — to differentiate the new RealPlayer Cloud from general-purpose cloud storage and sharing services, such as Dropbox. The company says the ability to share and synchronize long-form videos gives RealPlayer Cloud a leg up on the likes of Instagram and Vine.

Features of RealPlayer Cloud include the ability to take a video with a smartphone and quickly view it on a large-screen television using a Roku box. RealNetworks is also working on Google Chromecast integration.

For example, if a mom or dad can’t make it to a kid’s sporting event or school activity, the other parent can shoot a video on a phone and upload it for viewing on the television by the absent parent even before the kid gets home.

“The problem today is multiple platforms, email, all of these different issues that make it, if not impossible, very difficult to get a consistent experience,” said Scott Uomoto, a RealNetworks senior vice president. With the new service, the company is aiming to solve that problem, attract new users and breathe new life into the RealPlayer brand in the process.

RealPlayer Cloud part of a broader effort by the Seattle-based company to rebound under the leadership of Rob Glaser, the RealNetworks founder who is serving as interim CEO of the company. RealNetworks has gone through a series of cutbacks and reorganizations in recent years, and recently moved to a new headquarters south of downtown Seattle.

The RealPlayer Cloud service is free to use for up to 2GB of storage, with additional storage plans starting at $4.99/month for 25 GB, going up to $29.99/month for a 300 GB account, targeted to video pros. Annual subscriptions will sell for a reduced rate (49.99/year to $299/year), and the company will award additional free storage beyond 2GB for completing tasks such as connecting different devices.

If elements of this sound familiar, RealNetworks previously unveiled a service called Unifi that promised to help people synchronize a variety of media via the cloud. The company ultimately decided not to bring that service to market, but says that much of the knowledge and technology gleaned from that product has been incorporated into RealPlayer Cloud.