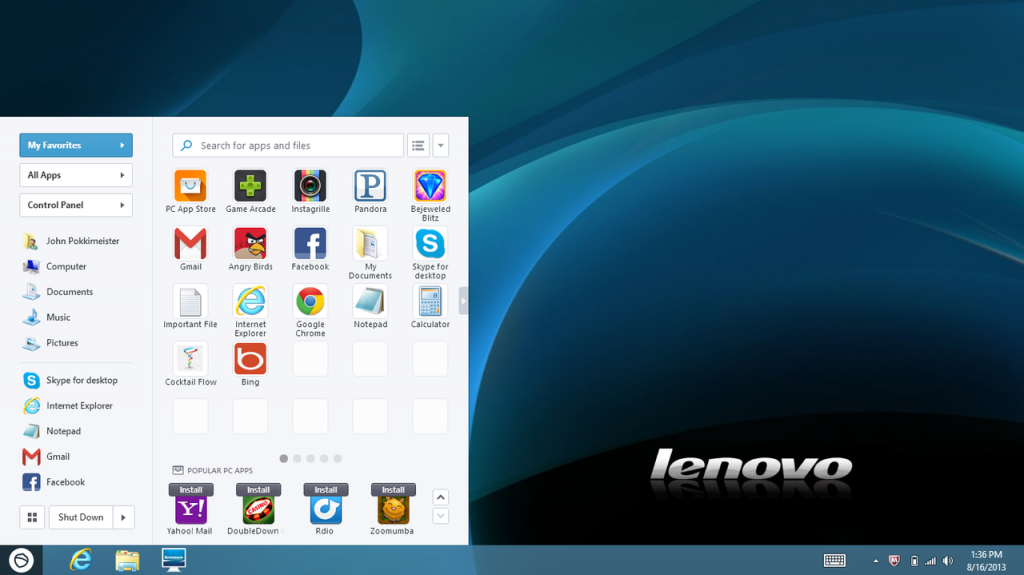 Lenovo, which recently took the title of world’s largest PC maker, is going around Microsoft to restore something much closer to the traditional Start Menu in its Windows 8 machines, in addition to letting users sidestep the Redmond company’s built-in app store.

San Diego-based SweetLabs, which makes the Pokki app platform, this morning announced a deal with Lenovo to preinstall Pokki on new machines around the world. Pokki puts an acorn button on the lower left of the Windows desktop taskbar that provides access not only to its app store and game arcade but also to the Windows control panel and other features that users of traditional Windows versions have grown accustomed to seeing there.

The deal is a boon for SweetLabs, which also has a development office in Seattle. In conjunction with the Lenovo deal, SweetLabs says it’s expanding its app store beyond web apps to include traditional desktop programs and Windows 8 Modern UI apps.

The arrangement is a poke in the eye for Microsoft, which has been trying to shift user attention to its new Start screen and Windows store. The company has already conceded to user frustration by adding back the Windows flag in the lower left of the traditional desktop in Windows 8.1, although it leads to the Start screen by default, not to a traditional Start menu.

In an interview this week, SweetLabs co-founder Chester Ng said the company has been quietly giving itself “a crash course” in the world of computer makers, aiming to solve some of their biggest pain points. The arrangement allows PC makers to make additional revenue themselves by getting a cut of app sales.

“We started our company five years ago with a plan of building the largest app distribution platform on planet,” he said. “We think this is a pretty major step in that direction.”

SweetLabs previously announced a partnership with Acer to preload its game arcade, giving it relationships with two of the top four computer makers. Asked if the company was working on deals with additional PC makers, Ng said SweetLabs didn’t have anything to announce, yet.