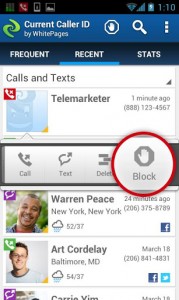 The WhitePages Current Caller ID Android app, which displays not only the names of callers but also their location and social media updates, just received an update that allows you to easily block unwanted calls and texts.

The app now features a “block” button when you get a call or text from someone you would rather ignore.

“As much as we love being able to keep people connected to those closest to them, we’ve discovered that people also want to be able to avoid those who bring stress to their lives — like telemarketers, ex significant others and other unwelcome solicitors,” Lori Roth, Director of Mobile Products at WhitePages, said in a press release.

The new feature allows you to send calls to voicemail or just drop the message altogether. Blocked messages won’t show up in your call and text history, and you can choose to track those messages inside the app or remove all activity. Users can also block future messages from a specific number.

Current Caller ID, which was one of TIME’s top apps of 2012, has been downloaded four million times since launching in August 2012.

WhitePages CEO and tech industry veteran Alex Algard was on the GeekWire podcast last fall, telling us the story of the company’s founding and its current strategy, including its mobile apps, its approach to privacy and how it’s keeping a startup-style approach even after 15 years in business.