WhitePages is taking the unusual step of buying out its venture capital investors, paying $80 million to buy back shares from Technology Crossover Ventures and Providence Equity.

“WhitePages believed in the further opportunity to grow the company and its products, including a big enterprise play with its recently announced PRO division for business, and was able to accelerate the process due to favorable debt markets to provide a good return for investors,” a company spokesperson said.

The company purchased the shares through a combination of cash and debt. TCV and Providence invested in WhitePages in 2005, pumping $45 million into a company which had never taking venture capital during its first eight years.

It’s unclear what valuation was placed on WhitePages, which was founded in 1997 by Alex Algard as he was completing a summer internship on Sand Hill Road in Silicon Valley. (Algard talks about the history of the company in this GeekWire podcast in minute 13, noting how he bought the domain name for $800). 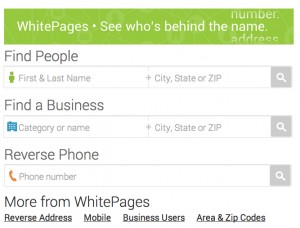 WhitePages is a people search directory and database with billions of people records, and Algard says they are trying to kill off the phone book.

Business Insider reports today that the 130-person company is on a revenue run rate of $60 million, with Algard saying that the venture investors wanted out of the deal and because of the cheap debt right now they were able to raise the money.

We’ve asked Algard for additional comments on the deal, and we’ll update this post as we hear more.

Follow-up: WhitePages CEO Alex Algard: Not having VCs in our business will allow a ‘cleaner’ focus