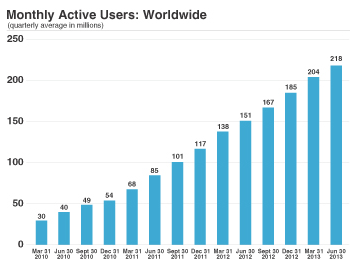 Twitter’s IPO was just made public and the company is looking to raise $1 billion.

The SEC filing also reveals Twitter’s earnings numbers for the first time. The social media giant is not yet profitable and reported a loss of $79 million in 2012, with an accumulated deficit of $418.6 million as of June 30. Through the first half of this year, Twitter brought in $253.6 million in revenue with a net loss of $69.3 million.

The company also noted that mobile “has become the primary driver of our business,” and that more than 65 percent of its advertising revenue came from mobile devices. In addition, 75 percent of its monthly active users are accessing Twitter via mobile.

Earlier this month, Twitter filed for its IPO but did not have to reveal details thanks to the JOBS Act.

Check out some of Twitter’s financial data below: