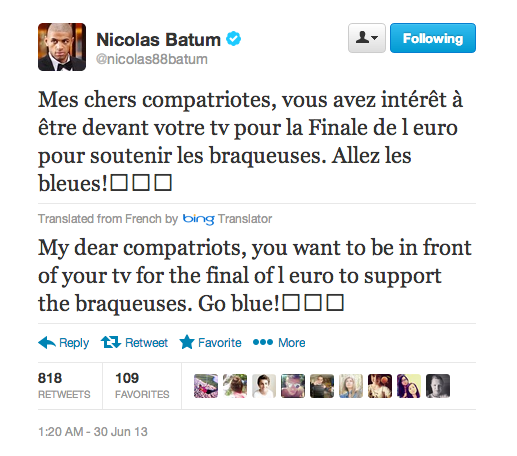 Microsoft has come up with some pretty cool language translation applications over the past year, and now Twitter is getting in on the fun.

The social network giant is testing out a built-in MIcrosoft Bing translation tool that allows users to translate tweets with one click.

One person I follow that tweets a lot in a foreign language is Nicolas Batum, a small forward for the NBA’s Portland Trail Blazers. I opened up one of his tweets in French and clicked on the “view translation” button, which immediately spat out the tweet in English, which you can see above.

Microsoft showed off this new integration, which is now available on Twitter for Windows Phone, during the Build conference in San Francisco last week.

“The integration of machine translation technology from Microsoft Research has the ability to broaden any application’s impact through a substantial increase in accessibility to real time communications and information sharing,” Peter Lee, Corporate VP of Microsoft Research US, said in this blog post. “No longer is language a barrier to real time instant connections around the world.”

Twitter has yet to officially announce anything and this feature is being rolled out to select users.

Bing, meanwhile, has been gaining traction lately. Last month, Apple announced it would incorporate web search results from Bing into its voice-enabled Siri personal assistant in iOS 7. Microsoft is also now using Deep Neural Networks (DNN) to improve the speed and accuracy of its Bing voice search and voice-to-text features.

And finally, today Microsoft said it will extend its Bing advertising platform to the new search experience in Windows 8.1, serving up ads as part of the “Smart Search” results displayed to users inside the PC and tablet operating system.

Previously on GeekWire: Bing Translator App out for Windows 8, lets you understand foreign words with a camera