Take the Emerald City’s most well-known techies and geeks. Then, bring them together once a month for a live 70’s style game/variety/talk show complete with original music and tightly constructed game sequences.

The Seattle startup scene could be in for an entertaining treat.

This is the formula for “The Tech Show,” which is set to debut Wednesday, Jan. 16th at the SpitFire Grill. Every third Wednesday of the month, this new show will be taking the idea of a tech “networking events” and adding in some wacky fun flavors sure to induce good laughs and geeky conversation.

The funny trailer above should give you an idea of what to expect. The show is hosted by Sasha Pasulka, senior product marketing manager at Tableau Software, occasional guest contributor here at GeekWire and wife of Jeff Dickey, another GeekWire contributor via his Nextcast video series.

“I am so excited and honored to be hosting this show,” Pasulka said. “I’m passionate about the people in the Seattle tech scene, and I see this a great opportunity to continue to showcase their ideas, their personalities and their overall awesomeness in a brand new way. Progress is always the result of getting the right people in the same room at the same time, and if a giant spinning Sasha head helps make that possible, I’m glad I could be of assistance.” 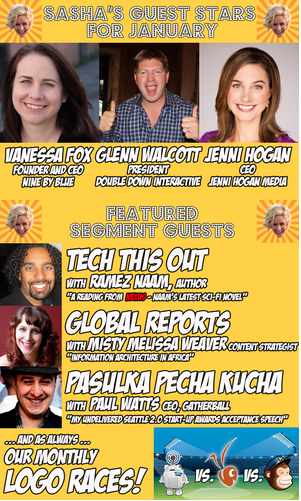 After an hour of cocktails and networking, the 90-minute show features magazine-style segments with seven different guests. For example, the “Tech This Out” portion is dedicated to product demos, while “Start-To-Finish” is a linear diary of the development around recent products. Everything from social media to biotech to gaming will be covered.

There’s also a digital news wheel that Pasulka’s three main guests will spin each show to dicate topics to be discussed. The main guests for the debut show later this month are Double Down president Glenn Walcott, Nine by Blue founder Vanessa Fox and Seatte’s social media maven Jenni Hogan.

The whole shebang is planned out beforehand and there will be props, costumes, original animation and original music. There’s even monthly animated logo races, which reminds me of the Hydro races during Mariners games.

The show is the brainchild of Korby Sears and his production company Technosaurus Events, which puts 26 live “three-ring circuses for tech scene rock stars” every year. Sears is a former game producer who has worked for Pop Cap and most recently Discovery Bay Games. He co-founded the well-known performance group Seattle School back in 2003.

The idea for The Tech Show came from the need for Seattle startup scene to have a “central, big top” event, as Sears puts it. He wanted to combine Pasulka’s personality with a fun and engaging “meetup” that had a game-show feel, all the while touching on a number of different tech topics.

“If you came here from out of town, you should attend a Sasha show first, as it will give you a survey of everything that’s happening in Seattle. It will be The Hub,” Sears explains. “Plus, the vibe at these events will be high-spirited, vibrant, and hilarious, making the pre-and-post show networking that much more lubricated and energized.”

Inspiration for the production side came from a variety of 1970’s shows:  the Gong Show, Match Game, $10,000 Pyramid, The Tonight Show with Johnny Carson, Laugh-In, for example.

“It will be the one event where you will never, ever have the desire to check your messages on your phone,” Sears added. “We also want it to be a showcase for the depth of personality of the people in tech.”

ADMISSION: $15 on Eventbrite: http://techshow.eventbrite.com / $20 at the door

Editor’s note, 4:45 p.m: This story was updated with comments from Pasulka and Sears