After operating under wraps for the past year, a new Seattle-based startup called Porch is making its presence known for the first time, in a big way.

The company, which is building a data-driven marketplace for home improvement, has raised a whopping $6.25 million seed round from an unusually large group of investors — more than 20 in all — including “super angel” Ron Conway, former eBay president Jeff Skoll, Facebook executive Javier Olivan and Seattle’s Geoff Entress. 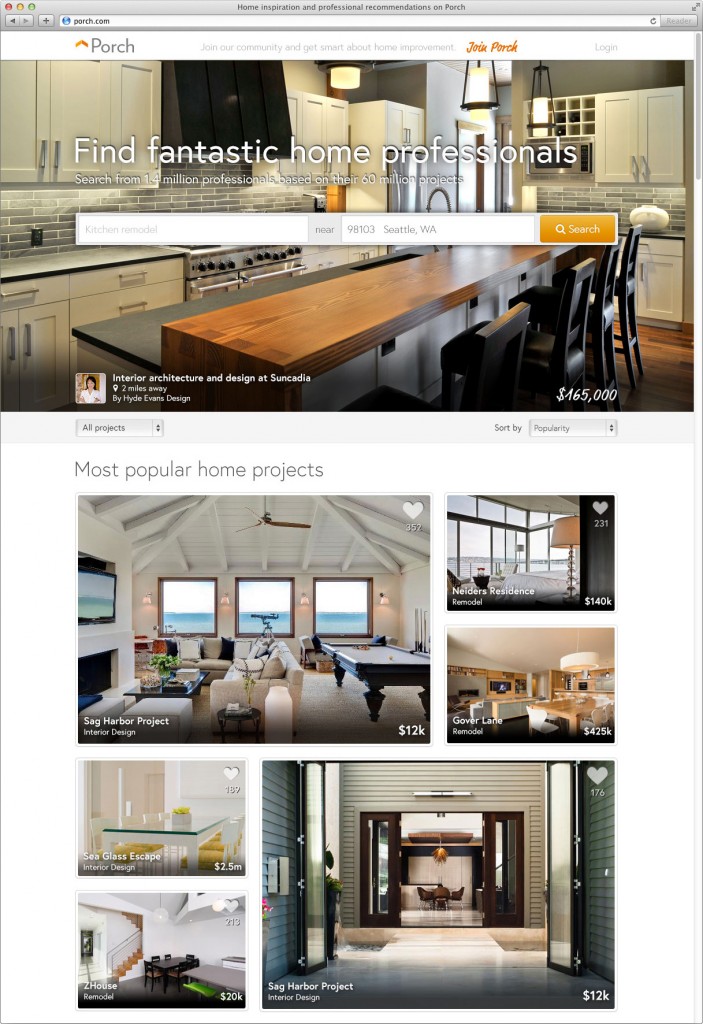 Porch says its national marketplace is designed to empower homeowners with information about service providers and the specific projects that have taken place in their neighborhoods — including pictures, pricing for the projects and customer reviews of the people or companies who did the work.

“We’ve organized a massive amount of data,” said Matt Ehrlichman, Porch’s CEO and co-founder. “We certainly believe that with more data, people will be smarter and more educated, and make better decisions on how to improve their home and who to hire.”

The company says it already has data on more than 60 million projects and 1.4 million professionals in its database. Ehrlichman declined to go into detail about the sources of the information.

Another aspect of the service is also similar to Zillow Digs or Houzz, in aiming to “inspire” homeowners by showing them specific examples of what they could do with their homes.

Porch will be free to homeowners. The company says it will ultimately make money from remodelers and other service providers, potentially charging them a fee for leads or transactions. A subscription fee for service providers is another possibility, similar to the approach taken by some real estate sites.

Porch will launch nationally later this year, but the company is offering early access to selected users who sign up via its site at Porch.com.

With 20 employees, Porch might be the biggest Seattle company most people have never heard of. Ehrlichman, who grew up in the Seattle region, attended Stanford University and co-founded the Thriva events management software company. That startup was sold in 2007 for more than $60 million to Active Network Inc., where Ehrlichman was chief strategy officer leading up to and beyond the company’s 2011 initial public offering.

Other Porch executives include veterans of Microsoft, Expedia, Google and Apollo Group, in addition to some of Ehrlichman’s former Active Network colleagues.

Ehrlichman and his family happen to be building a new home right now, and while the front end of the Porch web site wasn’t available when they were picking professionals to work on the project, they were able to use the underling algorithms to help guide their selections.

And yes, for the record, Ehrlichman says the new house will have a great porch.