Lots going on with the Sonics today, from a “stunning” season ticket priority wait list to a Sacramento group trying to block an arena being built in their city.

But first, important to note that tomorrow is a huge day. The two leaders of the Seattle investment group trying to bring NBA basketball to Seattle — Microsoft CEO Steve Ballmer and Chris Hansen— will join Seattle mayor Mike McGinn and King County executive Dow Constantine in New York City to meet with a committee of NBA owners. The Sacramento investors will also be there and both parties will present their arguments to the owners for why their respective cities deserve an NBA team.

We’ll be following the meetings and will have a report on GeekWire tomorrow.

Some background on this whole situation: Hansen and Ballmer reached an agreement with the Maloof family (current owners) in January to buy 65 percent of the Kings for a reported $341 million. The group has already put down a $30 million non-refundable deposit and has requested for the team to play at KeyArena for two seasons before moving into the new SoDo arena in 2015.

But now Sacramento is fighting back, and two tech titans from the Valley have stepped up with more money less than a month before the NBA makes its decision to block the Seattle group’s bid to bring basketball back to the Emerald City or leave the standing deal intact.

NBA commissioner David Stern said publicly that Sacramento’s bid was far too low in comparison with what Hansen and Ballmer were offering. We may find out tomorrow if, with the addition of the new investors, Sacramento’s bid has increased.

After Wednesday, both parties will reconvene in front of the full NBA Board of Governors at its annual meeting April 18-19 when the official vote happens. That’s when we’ll know if the NBA is coming back to Seattle or not.

So back to today’s news. Hansen released some numbers on the priority wait list that opened up three weeks ago. There were more than 44,000 season-ticket requests — 32,000 within the first 24 hours — as well as 268 suites and had 983 businesses interested in sponsorship opportunities. 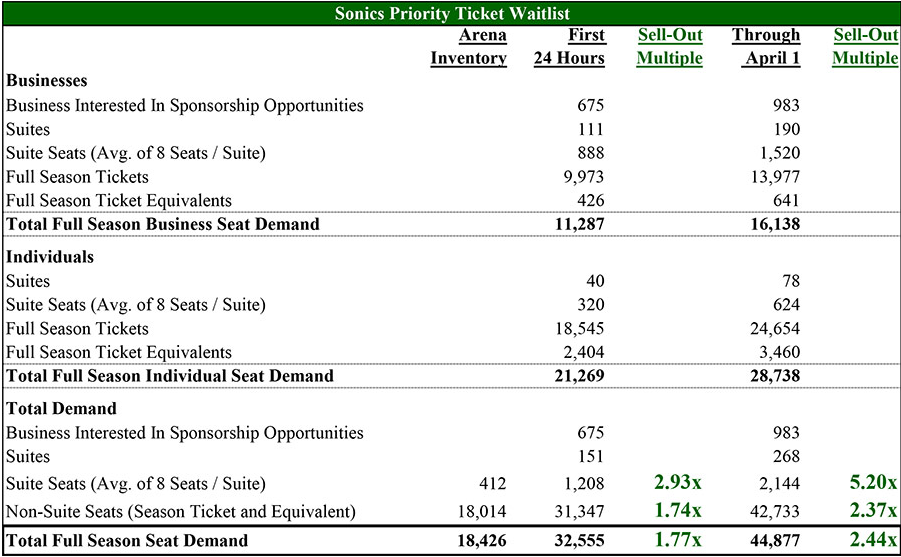 The timing of the announcement makes sense, as Hansen will use the numbers to show the level of interest Seattle has for an NBA team. Hansen wrote that the numbers are “nothing short of stunning,” and said that tomorrow’s meeting — and presumably the April 19th meeting — is one of the “biggest days of my life.”

“I know I am carrying the hopes and dreams of so many of you with me and I again just want to thank all of you for the privilege of having the opportunity to carry the torch for our Town,” he wrote. “It is hands down one of the most meaningful things I have ever done in my life.”

Sacramento mayor Kevin Johnson will be in New York to lobby on behalf of Sacramento tomorrow, as well as Senate President Pro Darrell Steinberg. If you recall, Steinberg is the guy who wrote a nasty letter to California Department of General Services director Fred Klass intending to vilify Ballmer and his involvement. He wrote that Ballmer was “engaging in activities which are clearly measurably detrimental to our State’s job and revenue base — not to mention use profits earned through business with our State to appropriate a California-based asset.”

Microsoft would later say that its company was not involved in the effort to bring the NBA back to Seattle.

In another bit of Sacramento news, a citizens’ group has filed a “notice of intent” to sue the city and stop it from building a new arena. That will challenge the new arena deal term sheet that was approved last Tuesday.

And finally, the Seattle investment group released a promotional music video today featuring Magic Johnson and Seattle rap star Macklemore. You can check it out above or click here for a direct link.