It’s been fun wearing Samsung’s new Galaxy Gear smartwatch for the past week. Nearly everyone who sees it has some sort of reaction: “That’s so cool,” or, “it’s totally from the future,” or, “that looks like a kitchen appliance,” or, “when are they going to design one for girls?” 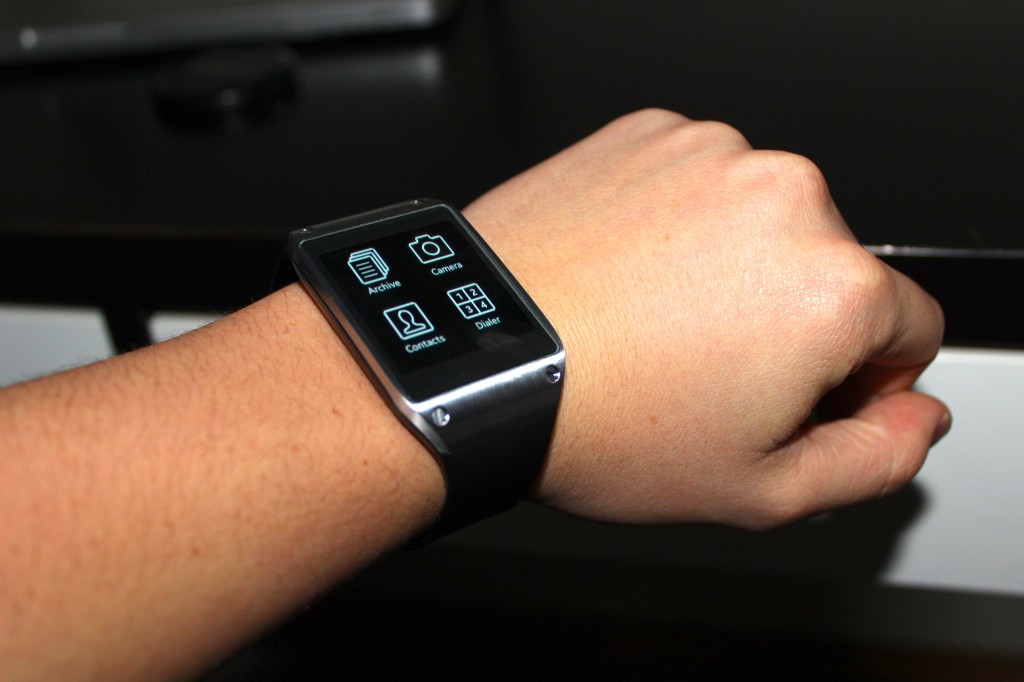 I’ve wanted to test out Samsung’s new device for a while, especially given all the hype around wearable technologies. As a 23-year-old, my peers and I wonder what tech device we’ll be using in two, five, or even ten years. When smartphones become obsolete — if they ever do — what’s next?

My first impressions with the Gear indicate that, yes, smartwatches really do have the potential to be the “next big thing.” But holy moly: There’s no way I’d pay $299 for Samsung’s first swing at a smartwatch.

Now, it’s worth noting that Samsung initially decided to make the Gear compatible with just two devices: the Galaxy Note 3 and Note 10.1 2014 Edition. This is quite silly and limits the number of people who can actually use the smartwatch right now.

The Gear, which cannot go online by itself, relies heavily on a connected Galaxy device for full functionality. While I’ve used a loaner Note 3 from AT&T to test out some simple call and text functionality, I’m waiting for Samsung to make my personal Galaxy S3 compatible. That way, I can receive all my notifications — whether it’s a call, text or Facebook message — via the watch. This, according to Samsung, should happen in the next few weeks, and I’ll plan on writing another diary post after that.

But for now, I’ve worn the Gear every day, checking out the weather and time, taking pictures and video with the 1.9-megapixel camera, and testing out the built-in pedometer (which does not seem very accurate).

The Gear lets you accept phone calls Dick Tracy-style, but in public, it’s a little obnoxious listening to the caller’s voice without a headphone jack. While this is a neat feature and really impresses some people, it’s like having a smartphone that can only accept calls with speakerphone. Not exactly useful.

Seeing text notifications on your wrist, however, is nice. Even though the watch doesn’t let you type out replies, it’s kind of cool using the S Voice feature to “speak” your message and then approve it with a simple “yes.” The voice recognition was a little clunky, but once that improves, I can see myself preferring this method instead of taking my phone out.

The majority of people that saw my watch were most impressed by the Gear’s camera, which sits on the band just above the screen. While it’s fun taking photos from a watch, the quality isn’t great and it’s a bit awkward aiming your wrist to get the right angle. Also, unless you have the right app downloaded, you can’t share photos from the Gear itself and must transfer it to the Note. It makes more sense to simply whip out your smartphone and take a quick picture.

There are a bevy of other issues I had: The user interface is a little difficult to get used to, the app store only has 50 or so options and the “Media Controller,” for music is lackluster.

But despite all my complaints and the Gear’s inability to do much of anything at this point, I actually like wearing it. It’s nice being able to check the time or receive notifications without pulling out your phone, and the watch itself feels and looks good.

Still, though, I’m content with waiting for a better, more inexpensive smartwatch, even with devices from Pebble and Sony going for below $150. My friend made a good point about my Gear, telling me that it’s “redundant technology that doesn’t make life easier.”

That’s the thing, though — I do think there are ways that it can make our lives easier past what Samsung, Sony and Pebble have put out. That’s why I can’t wait to see what the other tech giants — namely Apple, Google, and perhaps Microsoft — can come up with. If the device looks amazing, is packed with useful features and the price is right, count me in.