As the smartphone wars rage on, the industry’s two major hardware players continue to gain market share in the U.S., according to new numbers from comScore. 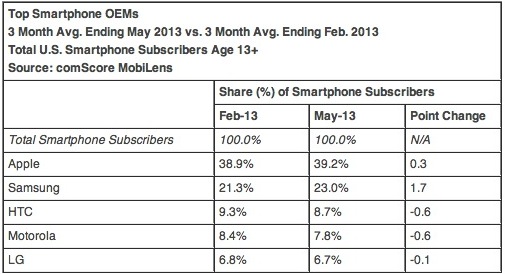 Samsung is quickly becoming the face of Android, with LG, HTC and Motorola all losing market share in the past three months.

That said, Android remains top dog in terms of OS market share, with more than 52% of the overall smartphone market, an increase of 0.7 percent over February of this year. 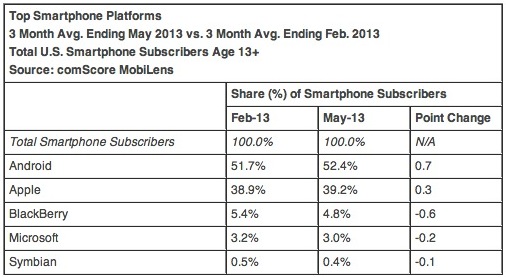 Apple continues to post modest growth, and remains the second largest mobile OS by a fairly large margin. While Tim Cook has said he doesn’t care about Android’s ballooning market share, this news may be more fuel for the fire of analysts who have been bearish on Apple’s prospects.

The biggest loser appears to be Blackberry, the former darling of the smartphone world. According to comScore, platform market share declined by .6 percent. This is more bad news for the company, as it reported an 84 million dollar first quarter loss today. While that news came alongside a growth in sales of the company’s phones, it would seem that customers are continuing to leave the platform for greener pastures.

Previously on GeekWire: Android vs. iOS: Why do iPhone users spend 26 more minutes on their phones?