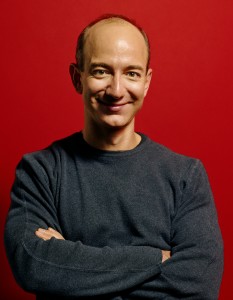 I guess at this point we shouldn’t be surprised by the moves of Amazon.com founder Jeff Bezos, who in the past two years has invested in everything from a clock designed to keep time for the next 10,000 years to the recovery of rockets from the historic Apollo 11 space flight.

So, why not take on one of the biggest challenges in business? Owning a newspaper.

As has been well documented, Bezos is buying The Washington Post from the Graham family for $250 million, a price tag in which many say the billionaire overpaid.

What’s really going on here? Why is a fierce and intensely private West Coast tech entrepreneur (and libertarian) buying one of the most prestigious newspapers in the country? A lot of folks are scrambling to figure that one out today, including us. (See: Robots? Kindles? Door desks? How should Bezos reinvent the Washington Post?)

Is there a longer-term strategy at play here that combines Bezos’ vision for selling content with Amazon? Or is this a pure vanity investment? Here are some of the best quips, quotes and commentaries we’ve read about the Amazon founder buying The Washington Post.

—”Why is Amazon’s founder betting on old media? Here’s one answer: Jeff Bezos loves content and he always has.”—Bloomberg BusinessWeek senior writer Brad Stone, and author of the soon-to-be-released book The Everything Store: Jeff Bezos and the Age of Amazon, in his story on Bezos buying The Washington Post.

—“Of the businesspeople I know, he and Bill Gates are the two most intellectually curious people I know. It doesn’t surprise me that Jeff would find something with the intellectual depth of The Post an intriguing, compelling thing to be involved with.” —RealNetworks CEO Rob Glaser, quoted in The New York Times story: A Mogul Gets a Landmark in the Capital.

—“There is one thing I’m certain about: there won’t be printed newspapers in twenty years. Maybe as luxury items in some hotels that want to offer them as an extravagant service. Printed papers won’t be normal in twenty years.”— Jeff Bezos in an interview with the German magazine Berliner-Zeitung as quoted in the TechCrunch story: Bezos in 2012: People Won’t Pay For News On The Web, Print Will Be Dead In 20 Years.

—”First, I’d guess that Jeff Bezos thinks that owning the Washington Post will be interesting, fun, and cool. And my guess is that, if that is all it ever turns out to be, Jeff Bezos will be fine with that. This is a man who invests in rockets and atomic clocks, after all. He doesn’t necessarily make these investments for the money. Or bragging rights. Or strategic synergies. Second, I’d guess that Jeff Bezos thinks that there are some similarities between the digital news business and his business (ecommerce)–and that no one in the news business has really capitalized on this yet.  — Business Insider editor and CEO Henry Blodget, whose online media company scored an investment from Bezos earlier this year, in the story: Here’s Why I Think Jeff Bezos Bought The Washington Post.

Jeff Bezos: The man who inspires millions of entrepreneurs that you can build big biz with low profit margin #respect

“With his penchant for 10,000-year clocks and a reputation built on long-term strategy, Bezos might be embarking on the project that most tests his patience. But if he can really mold something transformational out of old media with his new money, he will have beaten bigger odds in a more spectacular style than any he has so far faced.”—Emily Bell in The Guardian.

“The Internet is transforming almost every element of the news business: shortening news cycles, eroding long-reliable revenue sources, and enabling new kinds of competition, some of which bear little or no news-gathering costs. There is no map, and charting a path ahead will not be easy. We will need to invent, which means we will need to experiment.”— Jeff Bezos in his memo to staffers of The Washington Post. 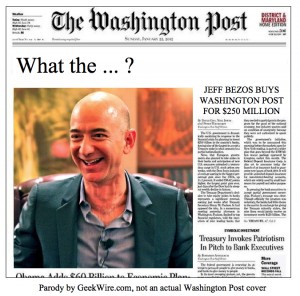 “First of all, don’t be deceived by the fact that Bezos is buying it himself, rather than Amazon–there’s little reason to believe this is a passion project. It just would’ve been tricky to make it a public takeover, because corporations don’t know how to value a newspaper’s future earnings. And besides, though the markets have been remarkably patient with Amazon’s continued losses, a money pit like the Post would’ve been harder to stomach.”—Lydia DePillis in The Washington Post story: Why The Washington Post isn’t a charity case for Jeff Bezos.

“Word that Amazon Founder and CEO Jeff Bezos is buying The Washington Post might cause consternation in its newsroom, but uneasy journalists wondering about what lies in store might be reassured if they read the letters he has sent to shareholders since 1997. Most annual letters to shareholders are crammed with fatuous drivel. A few stand out. Warren Buffett’s commentaries on the performance of Berkshire Hathaway have long been compulsory reading for investors. Jeff Bezos’ reports on Amazon should be required reading – not just for the journalists who are about to become his employees – but also for anyone aspiring to build and lead a company.”—Silicon Valley venture capitalist Michael Moritz in the commentary: Stop the presses: A new press lord appears.

The Worst Thing About Bezos Buying The Post: He's not going to be the day-to-day leader. Me @Slate. http://t.co/Fba9uvRRk7

“Now the Grahams can go back to doing as they see fit with Kaplan, without worry that they are in any way imperiling the newspaper’s public trust. That trust has been passed to Jeff Bezos, who will hopefully treat it with more care than his company did those heat-stricken workers deemed undeserving of an air-conditioning system. I avoid buying from Amazon as best I can, but I’ll keep subscribing to my old paper as long as they keep printing it, which, to hear Bezos himself tell it, will likely end sooner than the mogul’s 10,000-year clock.”—Alec MacGillis in The New Republic story: Jeff Bezos Is Bad News: Why the Washington Post Should Worry.

“But the fairest way to look at the deal is to see it as something done by a man who is attempting to completely change the way people and corporations distribute, purchase, and consume practically everything—and who wants to send humans into space en masse.”—Matt Buchanan in The New Yorker story: Why Jeff Bezos bought The Washington Post.