Software veterans Ethan Lowry and Joe Heitzeberg are moving into the realm of hardware with a simple and groundbreaking idea—a non-mechanical device that can turn your iPhone into a 3D camera.

Not surprisingly, the prototype of this device — named the Poppy — has been met with a great deal of interest. With three days left to go in the project’s Kickstarter campaign, they’ve raised more than $164,000 — more than four times the original $40,000 goal.

Heitzeberg joined GeekWire’s Todd Bishop and John Cook on the Geekwire Radio Show recently to discuss the creative origins of Poppy, the enthusiastic general response, and his own transition from software to hardware.

Continue reading for edited excerpts from the conversation.

Bishop: Poppy does something completely unexpected with your iPhone. For people who have never heard of the Poppy, what is it?

Heitzeberg: Poppy turns your iPhone into a 3D camera, so you can capture your world the way you experience it.

Cook: It’s actually a low-tech device—there’s no real technology in the device itself — it just uses the iPhone, which you insert into it.

Bishop: Can you describe the physical hardware?

Heitzeberg: “It has been described as a beautiful device — it looks very modern and cool. Picture a box: on one end it looks like binoculars, with two lenses that you put your face up to, on the top it has a slot to drop your iPhone into, and it has a cool twisting action. You twist open the front half of the box and it reveals a nice swath of orange poppy color. This contraption has no batteries or electronics—it’s rather simple, as you say—and it brings in light from the left and the right, bounces [the light] off some mirrors into your iPhone’s single lens, and records those two stereoscopic images. When you look in the other side, and view something that you recorded, you’ll see it in full color 3D, full motion. It’s like the ViewMaster, but instead of the 1965 Disneyland scenes, you’ll see stuff that you captured yourself with you friends and can share online in full-motion video.”

Cook: I’m curious how you came up with this idea to begin with.

Heitzeberg: It started with my co-creator Ethan, who’s really the idea guy and deserves full credit for the concept of Poppy. … What was really interesting to us about the startup scene was the maker movement. Your hobbies become your career, and all this direct-to-market stuff, raising funds on crowd-sourcing, using prototyping tools, 3D printing, making something tangible, and I thought, that’s what I want to do. I want to just dive in and it will be a fun learning adventure. … We both love cameras — who doesn’t love cameras? — and the iPhone is the world’s most popular camera. The thing that made it interesting and fresh is that you’re taking pictures of your food or things you wouldn’t ever have associated with old cameras that are heavier or big or more of an investment, and that enabled a new kind of self-expression and sharing, and social photography experience. That’s what’s been really special about the iPhone.

What was really cool about stereoscopic [cameras], going back to the 1800s—those dual leather-coated binocular things with those black-and-white cards you put in where you see the stereo views. [When you use one] you feel like wow, I’m now transported to World War II, I feel like I’m there. It’s static though. But if we could take that feeling of stepping into another world, combined with the creative self-expression capability of the iPhone, not to mention the developer platform and ecosystem—the sharing online content—that was pretty cool. So it was like, that’s gotta be the thing that will get us to be makers. We’re going to become product guys—real product designers. Let’s do that, figure out how it’s manufactured, that’ll be super fun. First step: is it possible? How do the optics work? It was an iterative process of laser-cut prototypes with duct tape to figure out ‘OK, the optics work, cool, but how do you get something manufactured?’ And here we are today on a Kickstarter. The product I’m holding … It looks like a polished, finished product because it’s ready for manufacturing.

Bishop: The Poppy is kind of a throwback, because devices are getting sleeker and simpler. Pretty much every phone looks the same these days. And then you come out with something like this, which looks like a square set of binoculars. What kind of uptake do you expect? 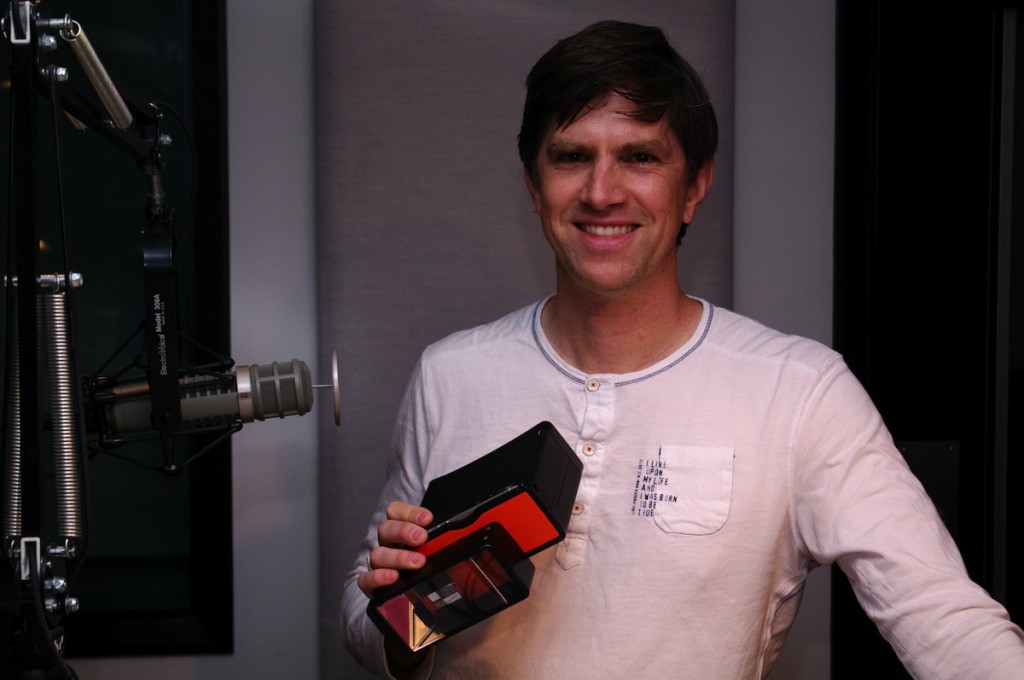 Heitzeberg: It’s been incredible. We set a goal of $40,000, which was the point of helping us get past most of the one-time “tooling” costs in manufacturing, and we hit that within nine hours. … We’ve had in the interim a ton of inbound retail interest from offline and online. It’s just been kind of overwhelming. What we’re 100 percent focused on now though is the maker movement and the Kickstarter audience. Really what we’ve decided is, “Let’s block out everything else in the future of this thing and just get all of our backers taken care of and [figure out] what we can add now that we have a little money to work with.”

Heitzeberg: In my fifteen years in software, not once did anyone ever come up to me in a café when I had computer code on the screen and say, “Wow, you’re working on code! Are you building some cool website or game?” Software is magical, and you can feel that when you’re creating something, but no one comes up to your screen and asks what the code is. But with this, we have a 3D-printed prototype, and everywhere we go, people come up to us and go “what is that? That looks cool! You put your iPhone into it, I’ve never seen that. Tell me about it!”

We were at a taqueria in Santa Barbara and this guy comes up and does that whole routine, which happens all the time, and his son comes over. I ask [the son], “Can we film your reaction for our Kickstarter video?” and the dad says, “I think it’s me you want. I’m David Crosby from [Crosby, Stills, Nash, and Young]”. So the biggest thing is that we’ve gone from software, where nobody cares what you’re working on, to a tangible product that you get to touch and feel and pass around, and people are curious about, and that’s gratifying. Even celebrities will come up. It’s pretty neat.”

Listen to the full show with Heitzeberg below or directly via this MP3 file. The conversation begins in the second segment, starting at the 8:10 mark.