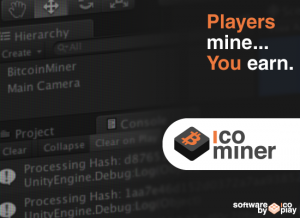 While game developers like GameHouse are looking for new tweaks to the free-to-play business model that will help increase revenue for their offerings, it looks like there might be a new sheriff in town. Soon, you might be able to support your favorite game developer by letting them mine Bitcoins using your computer while you’re playing their game.

First mentioned by PocketGamer, the soon-to-be-released Icominer plugin, developed by British firm Icoplay, makes it possible for any game built on the popular Unity gaming engine to mine Bitcoins for the game’s developer.

It’s similar to what Seattle-based CoinLab has been doing with its CoinLab Partners tools, which allow users to earn in-game items and currency for certain games by mining Bitcoins using a separate app.

The good news is that, as the Icominer plugin is currently built, there’s no way for developers to hide the fact that they’re using your device as a miner in addition to a gaming device. According to Icoplay’s FAQ, users will have an option to opt out of letting the game mine Bitcoins from their device, and there will always be a small icon present whenever Icominer is working on mining Bitcoins.

That said, Icominer does allow for an interesting take on the free-to-play business model that’s sweeping the casual gaming industry. Instead of sitting down to watch an advertisement, or forking over a few bucks for an in-game item or two, a user can choose to let a developer leverage their GPU’s potential as a Bitcoin mining machine to grow their revenue that way.

But Icominer might not replace traditional revenue sources, at least not yet. The value of a Bitcoin continues to fluctuate wildly, and people who install Icominer won’t be contributing the horsepower that dedicated mining rigs can bring to bear. Still, it’s a chance for free-to-play devs to create a small revenue stream from a group of people who otherwise might not have paid at all.

There’s no word yet as how different app stores will react to the Icominer plugin. While it’s possible to build Unity games for iOS, it doesn’t seem like Apple would look kindly on Icominer’s capabilities, and other marketplaces might have similar reactions.

If Icominer takes hold, it could open up a whole new avenue for game developers to monetize their apps, without costing users anything but some extra processing time.

Previously on GeekWire: The future of freemium games: How GameHouse sees the model evolving