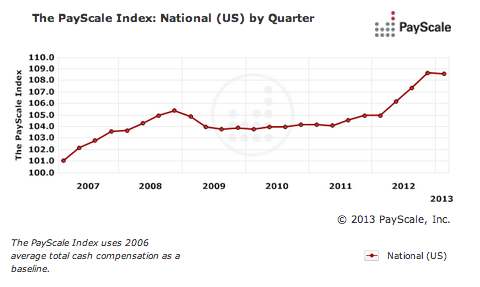 It looks like we’ve slowed down a bit in our economic recession revival.

After three consecutive quarters of substantial wage increases, salaries fell slightly during the first quarter of 2013. That’s according to Seattle-based salary data company PayScale, which found that U.S. earnings fell 0.1 percent from Q4 2012.

But still, wages were still up year-over-year across all industries.

“Building upon the current political and economic climate, this quarter was a bump in the road to recovery, as wages fell in previously high-performing areas including IT, Biotech, and Oil & Gas Exploration,” Katie Bardaro, PayScale Lead Economist, said in a release. “It remains to be seen if this quarterly drop is a blip on the radar, or a long-term trend.”

“This wage growth for small companies is largely driven by two factors: their competition with larger firms for top talent and their ability to react and respond,” Bardaro said.

Wages in Seattle fell 0.2 percent, and other tech cities like Minneapolis and Boston saw drops as well. In terms of industry, biotech wages fell the most out of any tech-related field, with wages dropping more than one percent in Q1. Maybe Seattle’s soon-to-be built biotech hackerspace will fix that problem.