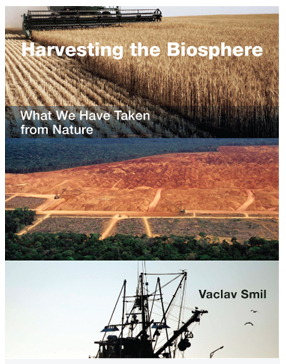 Microsoft chairman Bill Gates is a voracious reader, carrying a tote bag of books on his travels across the globe. Earlier this month, Gates shared the eight books that are on his reading list for the summer, ranging from   by Jared Diamond to The Box: How the Shipping Container Made the World Smaller and the World Economy Bigger by Marc Levinson.

But here’s one book that Gates recently completed, which he loved. It’s called “Harvesting the Biosphere: What We Have Taken From Nature.” The 320-page book is dense, and Gates admits that it takes some patience to get through. It’s also an obscure book, with just one customer review on Amazon.

Gates writes in his elaborate review, which contains graphics and a video interview with the author, that Harvesting the Biosphere helps one understand the impact that humans are having on the planet.

There is no author whose books I look forward to more than Vaclav Smil. He jokes that no one reads his books (he’s written more than 30 of them). It’s true that each book only sells a few thousand copies. But I’m trying to read everything he writes.

Why? He understands a phenomenal range of subjects, from energy to agriculture. On any page he might talk about meat-eating among bonobos or the average human life span during the Roman Empire. Plus he is rigorously numeric, using data to illuminate every topic he writes about. The word “polymath” was invented to describe people like him.

In Harvesting the Biosphere, Smil gives as clear and as numeric a picture as is possible of how humans have altered the biosphere. The book is a bit dry and I had to look up a number of terms that were unfamiliar to me, but it tells a critical story.

Gates has immersed himself in these topics in his post-Microsoft career, and as we noted on this weekend’s GeekWire radio show (which we devote entirely to Bill Gates) the billionaire philanthropist is now looking at planet Earth as the next operating system he wants to figure out.