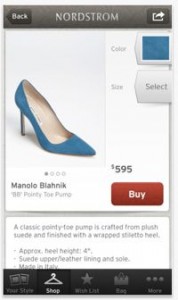 Over $1 billion in direct sales. That’s what Nordstrom raked in according to their fiscal year 2012 report, a first in the company’s history. Overall sales grew by 12.1 percent year-over-year with e-commerce achieving an impressive 37 percent growth. Those numbers put Nordstrom 4.8 percent ahead of comparable retailers according to Internet Retailer. Why the success?

Understanding that if it wanted to avoid teetering on the brink of extinction, like big box dinosaurs JC Penny and Sears, it would have to invest major resources to cater to online consumers. It is why Nordstrom bet $150 million on infrastructure improvements. Those improvements included:

“(Ecommerce) is our fastest-growing channel and it is expanding our reach to existing and new customers. We see substantial opportunities for outsized growth to continue as we further improve the online customer experience,” said company president Blake Nordstrom during the company’s latest earnings call.

Mobile also played a big factor — driving $260 million in sales in 2012. Perhaps even more impressive is that the numbers released by Nordstrom did not include the totals for trendy fashion site HauteLook, which the company acquired in 2011.

The dividends have paid out in more ways than just revenue for the company. According to Xtreme Labs, Nordstrom’s app, first launched in 2011, was ranked as 3rd highest rated retail app on Android devices. Staying connected with the consumer is one of the many reasons Nordstorm also made Fortune’s most admired companies.