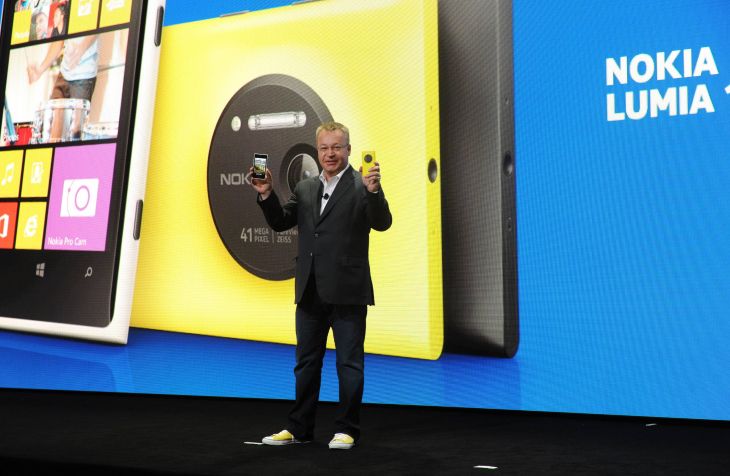 Nokia CEO Stephen Elop, walking around the stage in his trendy yellow shoes, was clearly having fun at the unveiling of the Lumia 1020 in New York earlier today. Forty-one megapixels will have that effect.

But the very last question at the press event made him conclude on a serious note. The question: What is Nokia doing with the Lumia 1020 to get more than AT&T’s normally “crummy” sales and marketing support for its devices? The wireless carrier has the exclusive on the new phone.

Elop, the former Microsoft exec, started by defending Nokia’s decision to try to create a “third ecosystem” by throwing its weight behind Windows Phone, competing against iPhone and Android.

“We stand by that decision because, if you look at the market today, you can see two big competitors. We used to talk about Android as a competitor,” he said. “We now talk about a hardware company (Samsung) as a competitor. That whole dynamic has changed.”

However, he said, one reality of trying to establish that third ecosystem is that you have to work harder to help consumers, partners and the people who sell the phones understand what that alternative is about. That is Nokia’s responsibility, he said.

Addressing the “crummy” part of the question, he concluded by praising AT&T.  “It’s hard work for all of us — and I know we have tough moments — but boy, we’re very pleased that they’re committed and standing behind us every step of the way as we grow with them.”

AT&T President Ralph de la Vega was also at the event, which made that last bit seem less like a statement and more like a plea.