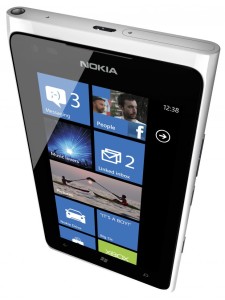 Nokia is still losing money, but at a smaller scale, and the smartphone maker this morning reported rising shipments of its Lumia line of Windows Phones — helping Microsoft reach a milestone in its effort to become the clear No. 3 player in the global smartphone market, behind Android and iOS.

As noted by the Verge, that results puts Lumia sales ahead of shipments for the struggling BlackBerry line (although the time frames for their quarters don’t precisely match up.)

Putting this in perspective, however, Nokia at one point was reporting more than 25 million quarterly smartphone shipments, so the numbers still show how far the company needs to go just to get back to where it was in the Symbian era.

Microsoft reports its quarterly earnings later today — check back for coverage on GeekWire this afternoon. Nokia is the largest maker of Windows Phones, but HTC and Samsung also make Microsoft-powered devices.