You may have heard of Nate Silver, a well-known statistician and editor of the FiveThirtyEight blog who correctly picked the winner from all 50 states in the 2012 presidential election.

David Rothschild, though, hasn’t garnered quite as much attention. But the Microsoft researcher has a prediction resume that’s nearly as impressive and he’s offered some interesting insights into what’s going to happen in 2014.

Rothschild’s previous data-backed predictions have been on point. He correctly picked all but one state from the 2012 presidential election — far earlier than Silver did, actually — and also predicted 19 of 24 Oscar winners this year.

Rothschild, who’s based in New York City and helped manage the Xbox interactive polling feature during the 2012 election, constantly updates his prediction website, PredictWise, for categories like politics and sports. 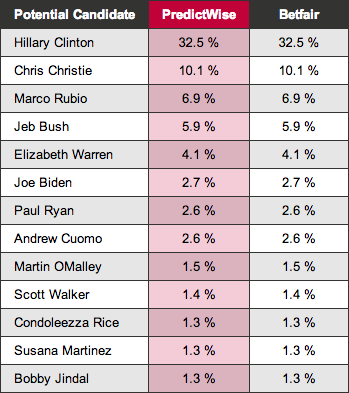 In this interview with Microsoft, he shelled out predictions for the Super Bowl, the 2014 World Cup and the upcoming presidential elections that mirror his data on Predict Wise.

Rothschild said that Hilary Clinton has an “extremely high likelihood of victory,” next year with a 32.5 percent chance of winning the election.

As for the Super Bowl, Seattleites will like Rothschild’s data-powered prediction. He’s got the Seahawks with a 24.7 percent chance of winning the Lombardi Trophy, with the Denver Broncos close behind at 22.5 percent.

Finally, he thinks Brazil is most likely to win the 2014 World Cup, with Argentina and Germany just behind the host country.

So, there you have it. If you’re looking to make some bets in Vegas, Rothschild’s data might be a smart place to do some research if you want predictions based solely on the data.

“I don’t make decisions from my gut,” Rothschild said in the interview. “I make decisions based on as much information as possible, and then I make them with the least emotion I can. It’s a very scientific process that you need to repeat very systematically in order to be consistent in what you do.”