It’s a good day to be Bill Gates.

According to Bloomberg’s Billionaire Index, Gates’ reclaimed the title of world’s richest man for the first time since 2007, as his fortune reached $72.7 billion this afternoon and pushed him $600 million ahead of second-place Carlos Slim. 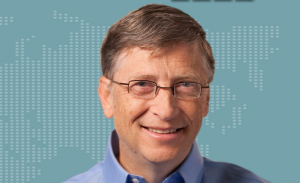 And on top of that, Microsoft’s stock hit a five-year high today, closing at $34.08. The company’s stock, which accounts for less than 20 percent of Gates’ fortune, has grown nearly 28 percent from the same time last year.

But the stock hasn’t moved much in the past five years, up just 13.6 percent, as new CFO Amy Hood and the executives in Redmond will have a difficult slog ahead. They face a tough market for Windows 8, with analysts noting that PC shipments are falling even in the wake of the release of Microsoft’s new operating system in October.

The five-year high comes even as several investment firms have downgraded Microsoft in recent days, following news that the PC market is losing steam.

The last time we checked in with the Bloomberg Billionaires Index in January, Gates’ net worth was at $63.4 billion after he added another $7 billion during 2012. Bloomberg reports today that his fortune has grown by $10 billion just this year. Slim’s net worth, meanwhile, has taken a hit largely due to bill just passed that may threaten his grip on the Mexican phone and television industry.

Previously on GeekWire: Activist investor shakes up Microsoft stock with $2B stake