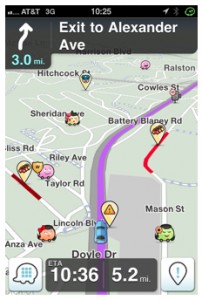 Bloomberg News says this morning that Google may try to acquire Waze, the traffic and mapping technology company that Facebook is reportedly also interested in buying, and plenty of M&A rumors have circulated around the company for months. The stakes are high, with a reported asking price of more than $1 billion.

The piece also mentions, as an aside, that Microsoft is an investor in Waze.

Wait, is that right? Yes, although the Microsoft investment has not been widely reported, it is true, we’ve confirmed independently this morning. Microsoft’s stake presumably isn’t large enough to throw a wrench into the Google or Facebook bids, but the situation creates a new subplot, at least, in the potential bidding war for the traffic technology company.

Microsoft isn’t saying whether it would be interested in bidding for the rest of Waze itself.

The Microsoft investment appears to date to a funding round raised by Waze in 2011, as noted by BGR at the time, quoting Israeli tech site TheMarker.

The situation is notable in part because of Microsoft’s relationship with INRIX, the Kirkland-based traffic technology company that competes with Waze in some areas. INRIX was initially launched based on technology licensed from the Redmond company.

INRIX has grown significantly beyond that initial Microsoft technology since it was founded. As part of its agreement with Microsoft, INRIX has paid royalty payments to Microsoft over the years, and those payments will likely end this year once a monetary milestone is met, said CEO Bryan Mistele. INRIX will continue to hold onto the intellectual property as part of the deal.

Mistele said that INRIX does not compete directly with Waze, but he noted that there’s a renewed interest in big data and analytics following the Tableau initial public offering and the reported buzz around Waze.

“Both the Tableau IPO and the interest in Waze shows that the space around big data, analytics and geospatial data has certainly heated up,” he said. “There’s a phenomenal amount of interest in these areas, and obviously we are in the middle of it…. We are quite excited and encouraged with what we’ve seen with Tableau and certainly the level of interest in Waze.”

INRIX also has been rumored to be working on its own IPO.

(Editor’s note: This post has been updated with comments from INRIX.)

Previously on GeekWire: I-5 bridge that collapsed into river is already gone from Google Maps