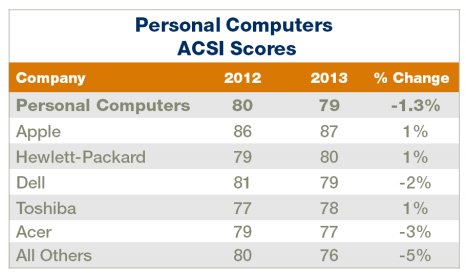 We’ve known for a while now that Windows 8 has not been a great help to the PC platform, but new data suggests that consumers really don’t like Microsoft’s new operating system. 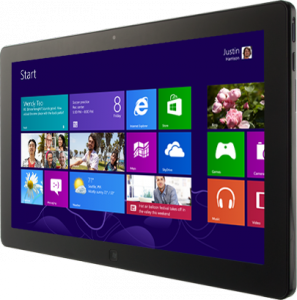 A new study released by the American Consumer Satisfaction Index shows that overall customer satisfaction with personal computers, which includes tablets, desktops and laptops, is down 1.3 percent to 79 points out of 100. Half of those surveyed by ACSI said they purchased their PC within the last year, when Windows 8 would have been preloaded onto their devices, and those who did were slightly less satisfied with their purchases than people who bought their computers more than a year ago.

“Microsoft’s revamped Windows 8 operating system does not seem to have provided a bounce in sales or in customer satisfaction for these manufacturers,” ACSI Director David VanAmburg said in a press release.

In fact, Windows 8 seems to have done the opposite. None of the Windows PC OEMs included in ACSI’s survey were able to come close to Apple’s score: a commanding 87 points, which means that the company is tied for the third-highest company score ACSI has ever measured.

The overall trend is bad news for Microsoft, which was hoping that Windows 8 would help stem the bleeding coming from the contraction in desktops and notebooks as more consumers move to tablets. While Windows 8.1 may bring back key features that will improve consumer confidence, it seems clear that Steve Ballmer’s replacement as CEO will have lots of work to do.

The ACSI survey asks 70,000 customers every year about their satisfaction with the products that they use. The results are plugged into a model, which produces a score out of one hundred points that represents how satisfied customers are with particular companies and industries.