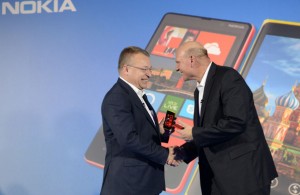 Nokia is one step closer to becoming a part of Microsoft, following a decision by the Justice Department approving the merger without conditions.

Microsoft announced in early September that it was buying Nokia’s Devices and Services division for $7.2 billion, and plans to make the company a part of its own hardware efforts. Nokia has been the most prolific manufacturer of smartphones that run Windows Phone, and the company recently released its first Windows RT tablet.

“We look forward to the date when our partners at Nokia will become members of the Microsoft family, and are pleased that the Department of Justice has cleared the deal unconditionally,” a Microsoft spokesperson said.

Stephen Elop, Nokia’s former CEO, is slated to take a position as the head of Microsoft’s hardware division. Elop is also reportedly in the running to replace Steve Ballmer as Microsoft CEO, though recent rumors have pegged him as less likely to get the job.

Now, it appears that the primary hurdle standing in the way of the acquisition’s completion is the European Union, which is expected to approve the deal soon, according to a report by Reuters.

Previously on GeekWire: Make no mistake: Nokia is Microsoft’s biggest deal ever