Just a month ago, Jawfish Games CEO and professional poker player Phil Gordon joined us on the GeekWire Radio Show and shed light on the similarities between playing poker and running a startup.

“You want to wait, wait, wait until you really have something,” Gordon explained. “Once you know you have something, you devote a lot of resources to it. A lot of what we do at Jawfish is building, testing and measuring. Once we find something that works, we go all in.” 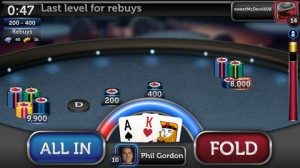 And that’s exactly what the company is doing today. Jawfish is putting their chips forward with the debut of two new gaming apps and the first-ever real-time social gaming platform that supports live tournament play for more than 100,000 users on iOS, Android and on the Web.

Debuting today are two real-time tournament apps: Jawfish Poker and Jawfish Words. The poker app, available on iOS only, is designed to be fast-paced with an “All in or Fold,” format, removing the need to wait for an entire table to place bets and allowing for quick and exciting gameplay.

Jawfish Words, meanwhile, is a word-search based game similar to Wordament. The game was originally launched earlier this month for the Kindle through a partnership with Amazon and the company says there have been 500,000 tournament players since its debut. Jawfish Words will be available on iOS, Android and Facebook, as players can compete in real-time across devices. 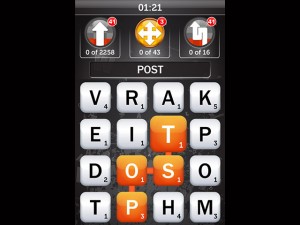 While there are certainly many casino gaming apps already out there, none really combine a real-time tournament aspect like Jawfish is doing.

“Even the simpliest games are even more fun when you play them in multiplayer tournaments,” Gordon said on the radio show. “That competition drives engagement.”

Building the back-end technology for a real-time tournament is difficult, but Gordon said his tech team came through. It’s a group of devs that helped build up the games at popular Full Tilt.

Jawfish recently won top honors at Launch Festival, the big San Francisco entrepreneurial pitch fest hosted by Jason Calacanis. The judges obviously were impressed with Jawfish, with Google’s Don Dodge proclaiming in his remarks that Jawfish “is going to make a lot of money.”

Choked up with emotion on stage at Launch, Gordon thanked his company’s 23 staffers and reserved some especially thoughtful remarks for his family.

“I think overlooked in the entrepreneurial landscape are the sacrifices that are made by kids, and spouses of entrepreneurs,” said Gordon, who commutes regularly between his home in eastern Washington and the Jawfish offices in Seattle.

Seattle has become sort of a hotbed for casino apps. Earlier this year, GameHouse launched its own casino on Facebook with more than a dozen games and also released a new iOS app. Then there’s Seattle-based DoubleDown Interactive, acquired last year by gambling giant IGT for up to $500 million, which has already generated more than $128 million in revenue in the past 12 months — an amazing achievement given that players of its casino-style games are betting virtual currency.

Gordon says there are reasons why you’re seeing so many casino games pop up.

“Casino-based games monetize at four times the rate of a standard casual game,” said Gordon, a former Netsys exec and computer scientist who is perhaps best known as a professional poker player and commentator. “It’s easy to get people to pay for virtual slots than virtual farms.”

While Jawfish will start with social-based casino games, Gordon said that “when laws change allowing real-money play, the Jawfish platform is ready.” That’s something that may be in the cards. All Things D reported in February that gaming stocks, including Zynga, jumped after New Jersey Governor Chris Christie supported the idea of online gambling in his state.

Only New Jersey, Delaware and Nevada have approved online gambling legislations. With such a small user pool in the three small states, Gordon doesn’t see much potential quite yet.

“Unless it’s taxed and regulated on a national level, it’s just a money losing pit,” he said. “What you need for a real-time game is critical mass and enough people playing simultaneously so it’s fun. With small states like that, you just can’t get critical mass and have it be fun. It’s just not an interesting market.”