SAN FRANCISCO — Microsoft’s Internet Explorer team showed some of the key features of Internet Explorer 11 in Windows 8.1 during an afternoon session here at the Build conference, including a cloud-based system that synchronizes favorites, browsing history, open tabs and user names and passwords across Windows 8.1 devices.

Microsoft calls this “continuous browsing.” Check out the video above for highlights from the demo, plus a glimpse of the new Reading List app in Windows 8.1. 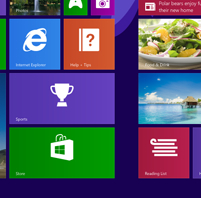 If you’re wondering about the laughter at the beginning of the video: Rob Mauceri of the IE team asked how many people do all their browsing on a single device — trying to point out that very few people do — and the cameraman staffing the event next to him raised his hand. It was a bit of a reality check from outside the tech bubble.

That said, many people browse across all sorts of devices these days — not just those running the latest version of Windows. That’s one place where this synchronization feature from the IE team will fall short for many users, leaving the door open for third-party service providers working across platforms.

Members of the IE team talked during the session about the benefits of their Windows-only approach, including the ability to take full advantage of the underlying hardware to power advanced graphics and other immersive experiences. Obviously Microsoft would prefer to see everyone just use Windows. But this is an example of that focus limiting the benefit for users who choose to use a variety of devices.

IE11 comes with Windows 8.1, which was released in preview form by Microsoft today. Dean Hachamovitch, corporate vice president of Internet Explorer, declined to talk about plans to update Internet Explorer on Windows Phone 8 or Windows 7, but he hinted that new versions are in the works.

Hachamovitch has more details on Internet Explorer 11 in this blog post.