I was getting so much done. And then it happened. 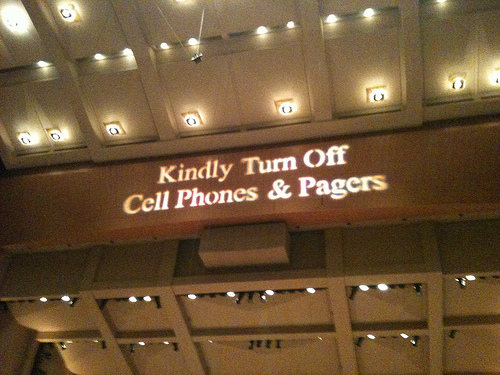 I was typing away at one of the long tables in the coffee shop, totally in the zone, a drained soy chai sitting next to my laptop. I heard a ringtone behind me. Then a woman picked up. “Hello?” she said. And she talked. And talked. And talked.

At first I just noticed. She’ll probably hang up soon, I thought. But she didn’t. After a while, I couldn’t think about anything else. My fingers froze over the keyboard as each word of her conversation took a slow, loud stroll through my brain.

“They think I’m so amusing,” she told her friend.

Now what do I do about it?

First, the long shot passive aggressive play. I turned around, spotted her blabbing by the window, shot her an annoyed look and turned back. She’d been gesturing with her arm, looking down at her table. She didn’t see me. They never do.

Then a search for allies. I scanned the cafe. Two people had headphones on. Did they have them on before? The top pocket of my backpack, slouched by my feet, held my own tangled ball of earbuds. But no. That would be giving in.

My column was smudges on a screen. The zone had packed up and left. The woman kept talking.

I was getting angry, and for good reason. A study published in March showed that hearing half of a conversation when someone speaks near you into a cell phone — a “halfalogue” — hijacks your brain, which can’t help but try to fill in the blanks. It’s one thing if you’re moving past it — you’re on a walk, or they are. But if you’re in line, or settled into a cozy spot at a coffee shop, you’re trapped.

I thought of a sign I spotted on a bus in San Jose last month:

Be a considerate commuter.

Everyone benefits from a quieter, relaxing commute.

I’d noticed the sign while texting in my seat, fighting motion sickness as the bus lumbered toward the airport. No way we need signs like that for etiquette so obvious, I thought at the time. Really, who’s left who doesn’t already know how irritating loud, long cell phone calls can be?

She wasn’t the only cafe lounger to get on the phone that afternoon. Two others had made calls while I was there, but they’d kept their voices down and their calls to under two minutes. I’d noticed, and gone back to work.

I’d been privvy to this woman’s halfalogue long enough to guess that she was probably a nice person. I imagined getting up, walking to her table, tapping her on the shoulder — “Oh, hold on a minute,” she’d say into her phone — and asking her to please take her call outside. The direct approach. Difficult, but effective. It would solve the problem right then and there.

I couldn’t do it.

This woman is STILL ON THE PHONE at the coffee shop & I think I have to leave. Can't concentrate AT ALL.

“Who does that?” tweeted another.

One person suggested I bring one of these next time. Another thought I should do this.

Then @warmdarn brought me back to reality.

I told her I’d wussed out.

.@moniguzman Give it a try next time! Sometimes oblivious ppl need a reminder that they share space w others. #civilsociety

Right about then the woman got up and walked away. Was she finally moving the call? Relief! But a minute later she was back. And so was her gabby friend.

I looked at my screen. It was asleep. This was hopeless. I should go home anyway, I told myself. It’ll be good to check on baby and the nanny. Plus I should water the plants.

It was BS and I knew it.

Maybe we don’t need signs to communicate basic tech etiquette to our fellow humans. We just need people brave enough to teach it.

That day, at least, that wasn’t me.

I stuffed my laptop and my notebook into the my backpack. Shooting the woman another useless look, I got up and left.