GoldieBlox, the toy designed to get girls interested in engineering, has made it to Toys ‘R Us.

A cross between Erector set and story book, the toy comes with instructions on how to complete a project relayed through a story. It’s a stark contrast to Lego’s Ikea-esque diagrams.

The Oakland company was started by former Seattle resident Debbie Sterling, who was inspired by her own journey into the world of engineering, as well as the dearth of women working in engineering and other STEM fields. 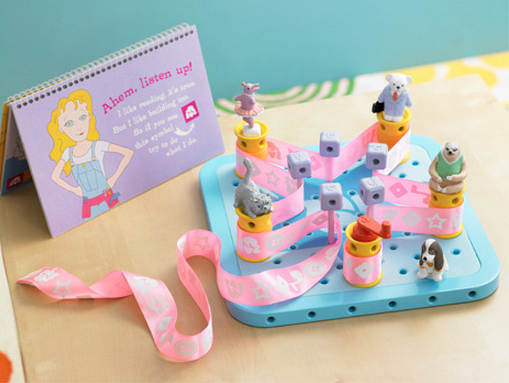 GoldieBlox got its start as a Kickstarter project, which raised nearly twice its goal from backers. Even before the product was finished, they had received tens of thousands of pre-orders, according to one of Sterling’s updates to the Kickstarter page.

Now, they’re headed nationwide with one of the biggest toy retailers in the country.

A video from the company celebrating the achievement touts that they’re “disrupting the pink aisle” with the new partnership. Here’s to hoping that there’s more disruption like that coming. (Also, did anyone else think the hammer in the ad is a reference to Apple’s 1984 ad?)

If you don’t have a Toys ‘R Us nearby, or prefer shopping at a local toy store, you can also use the company’s store finder to see if there’s something near you.

Previously on GeekWire: Meet the GoldieBlox: An engineering toy just for girls