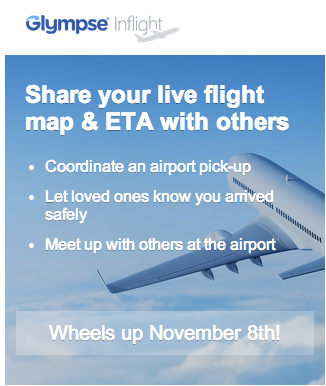 To find the location and arrival time of a family member or friend’s flight, people typically use the “Flight Status,” tool found on airline websites and other apps.

But now Glympse is making the term “Flight Status,” a bit more personalized. In a new partnership with in-air WiFi provider Gogo, the Seattle startup is allowing passengers to send their real-time location information — a “Glympse” — and estimated time of arrival with anyone while up in the sky.

Starting Friday, people on Gogo-enabled flights will be able to use a new feature on the Glympse app and website that enables them to send their location and ETA to others while en route to their destination.

After sending the Glympse once, you’ll be able to shut down your laptop or smartphone and the friend or family member will still be updated with your location throughout the flight.

And, thanks to the FAA’s recent regulation amendments, you’ll be able to use your electronic device to access this new feature during takeoff and landing.

“We’re working to put location technology wherever people may need it — on a phone, in a car, on your watch, and now on a plane — and this is a significant step towards making the Glympse ecosystem of dynamic location sharing ubiquitous for all,” Glympse VP of Business Development Timo Bauer said in a statement.

The feature is coming to Android first, and iOS later next week.

Glympse announced in August that it had passed the 10 million user milestone, with 40 percent of its user base coming from outside the U.S. We recently enjoyed listening to Glympse CEO Bryan Trussel talk offer up startup advice at our Startup Day last month.