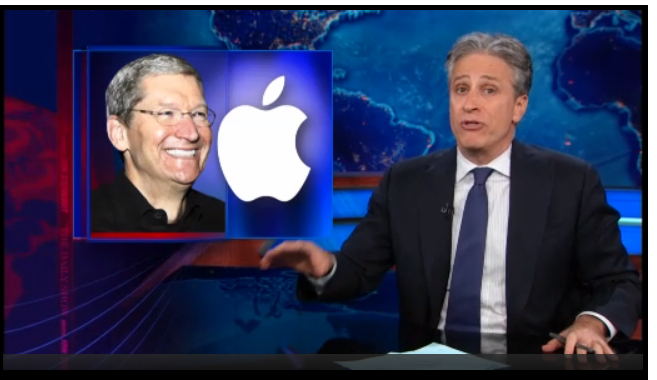 This is absolutely hilarious. Comedian Jon Stewart rips into iPhone-loving U.S. Senators who were fawning over Apple CEO Tim Cook during his recent testimony on Capitol Hill.

“Apparently there is nothing Apple can do to get us mad at them,” Stewart notes. “We could find out they’re using kitten hearts to power iPhones and we’d be like, ‘Well, if it doubles battery life, I’ll take two!’”

Apple takes it on the chin too. Stewart has been known to lampoon other technology companies — here he is going off on Google Glass and Instagram.

In this episode, Stewart makes fun of the bungled Apple maps feature. “I mean, come on. Maybe some prison time will make those guys think twice about directing me to a Chipotle in the middle of the Hudson River,” he joked.

But the best comedy follows Cook’s remarks about wanting to simplify the tax code. Stewart notes the irony of Cook’s position, pointing out that corporations are the ones who’ve pushed for loopholes that make the tax system so complex.

“Those offshore loopholes didn’t get carved out by poor people,” says Stewart. “Our tax code is purposefully complex, so that corporations with resources are the only ones who can find the very goodies that their own lobbyists have hidden in the labyrinth.”

Stewart then jokes that Apple would never “use complexity just when it suits their own business needs,” pointing out one of the company’s notoriously long and complex end-user licensing agreements. Great stuff!