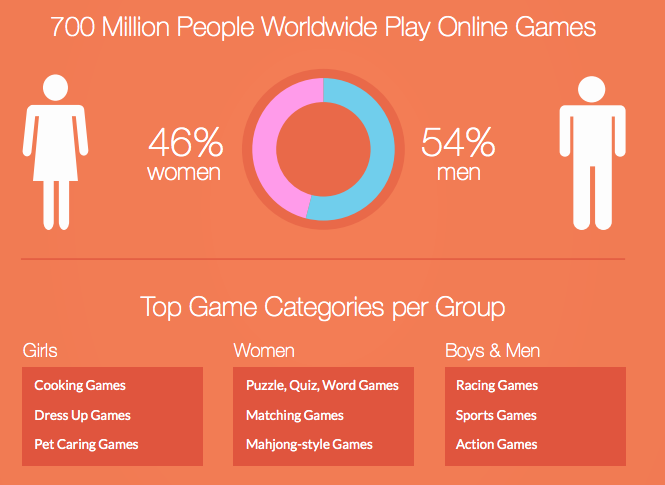 In yet another reminder of how quickly the gaming market is growing, a new industry study from Spil Games reports that 1.2 billion people are now playing games worldwide, with 700 million of those online. 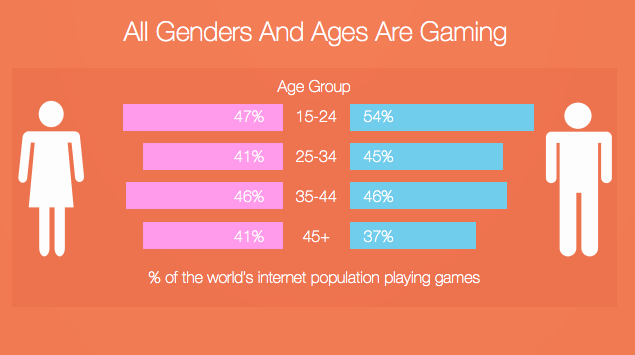 It’s not just guys playing, either — 46 percent of gamers are women. Netherlands-based Spil Games also noted the “the rising power of women and mothers within the online gaming sector,” citing that 73 percent of Turkish women aged 35-to-44 play online games.

In terms of top game categories per group, women tend to like puzzle, quiz and word games, while girls prefer cooking, dress-up and pet caring games. Boys and men, meanwhile, like racing, sports and action games. 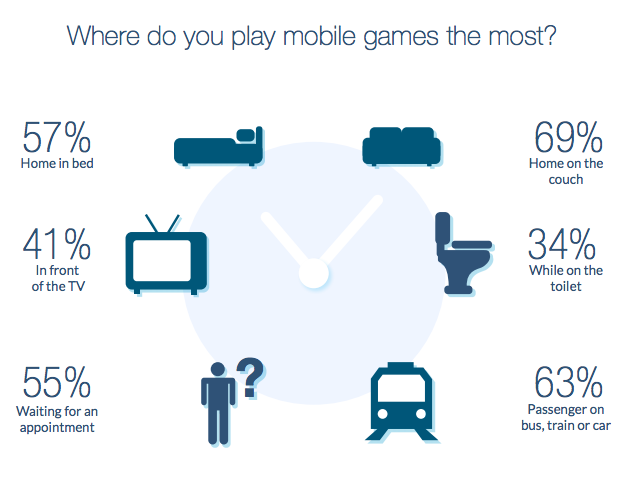 As far as location, mobile gamers tend to play on the couch (69 percent), while in transport (63 percent), in bed (57 percent), waiting for an appointment (55 percent), in front of the TV (41 percent) and on the john (34 percent). Spil found thatpPeople seem to spend more time gaming than they do with other forms of online entertainment, like watching videos on YouTube or reading news articles.

Oscar Diele, chief marketing officer at Spil Games, said in the report that this is key for advertisers.

“At Spil Games we’re witnessing the same high volumes of regular players and engagement rates that many other reports are pointing to,” he said. “For instance, across our 180 million monthly active users we’re seeing average session times of 30-40 minutes, which is more than double the session time on YouTube. These are session times similar to TV, which give brands the perfect platform to reach their target audiences online and across mobile.”

It’s important to note that what it means to be a “gamer” has changed significantly in the past few years. Previously, arcades and home consoles were the primary ways of playing games, but with the advent of smartphones, nearly everybody can be a “gamer,” anywhere.

To that point, Spil also discussed the mobile market, citing a report from eMarketer that referenced the growing U.S. mobile gaming audience, one that will reach 162.4 million people by 2015 (more than half of the U.S. population).

Here in Seattle, the gaming scene is budding. From Microsoft to Valve all the way down to countless indie companies, the Emerald City is chock-full of developers and designers putting out title after title. There are 16,500 employees working at nearly 300 game companies that have set up shop here, including Valve, Nintendo, Microsoft, 343 Industries, Big Fish, PopCap, Bungie, WildTangent, Z2 and U4iA, among others.

“A lot of people like to think that Silicon Valley carries some of that weight, but the reality is that this is the epicenter of gaming, whether it’s casual or core or mobile or PC or console,”  Big Fish COO John Holland said at an event earlier this fall. “The community here is alive in spades. …There is no doubt that this is ground zero for games and will continue to be for a long time, thanks to the esteemed accomplishments of our colleagues.”