I’m honored to be the guest this weekend on Four Peaks TV, hosted by journalism vet Hanson Hosein of the University of Washington’s Master of Communications in Digital Media program. We had a fun conversation about the GeekWire story, and the evolution of journalism as experienced by myself, my colleague John Cook and the rest of the team here at GeekWire. You can catch the show on air at 4 p.m. Saturday and again at 9 p.m. Sunday on Northwest Cable News (Comcast Channel 2), and it will also air later on UWTV. 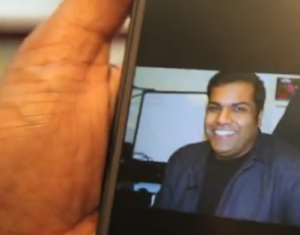 One of the standing features in the show is the “Teach Hanson” segment, in which the guests teach the host a skill or trick that they use in their lives. I’ll admit that I was a bit daunted by the assignment at first — Seattle entrepreneur and former NBA exec Brenda Spoonemore already taught Hanson how to shoot a basketball, which apart from hitting a backhand is really my only actual skill.

But I decided it would fun to demonstrate some of the behind-the-scenes tools that I’ve been using in attempt to make myself more efficient when reporting and taking photos at live events. Watch the video above to get a sense for how I’ve been using a combination of an Eye-Fi card, Apple’s Automator utility and Dropbox to automatically transmit and route photos from my digital camera to my computer and the cloud.

And if anyone in the GeekWire audience has suggestions for improving my system, I’m all ears!

In conjunction with the show, I also answered questions about GeekWire and changes in technology and media for public relations firm Weber Shandwick. Check out that Q&A here.