SAN FRANCISCO – The company behind one of the leading digital notetaking programs actually isn’t interested in making the world paperless.

Instead, Libin said, Evernote is most interested in making the best user experiences it possibly can for the service’s 75 million users. Now, as Evernote enters its fifth year of business, the company is using its clout to build partnerships with a number of hardware makers to produce a variety of physical products that integrate with its notetaking software.

Much like its partnership with notebook maker Moleskine, Evernote announced today that it’s working with 3M to make it easier to digitize Post-It notes.

While the Moleskine notebooks include special paper that aid Evernote’s handwriting recognition, Post-It won’t be producing special notes. Instead, 3M’s goal is to make every Post-It note compatible with Evernote’s software. To do that, Evernote has built a special “Post-It Camera” in its iOS app that will automatically detect the shape and color of a post-it note, and capture just the image of the note itself, which will then appear inside your Evernote notebooks.

In addition, Evernote will be able to automatically assign different characteristics to different colors of Post-Its, so that, for example, you can make green notes become reminders, while blue notes get added to a shared notebook. 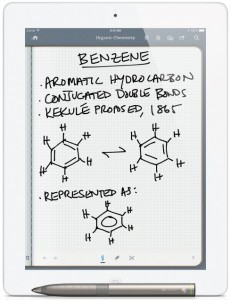 The stylus aims to eliminate that by better approximating the feeling of pen on paper. The Jot Script Evernote Edition will be made available for pre-order today for $74.99, and ship in October along with a new version of Penultimate.

As much as Libin talked about paperless living not being the goal, that Today, the company announced that they are partnering with Japanese company PFU Limited, the makers of the Fujitsu ScanSnap document scanner, to create the ScanSnap Evernote Edition, the first document scanner that has been designed and built from the ground up to work with Evernote. 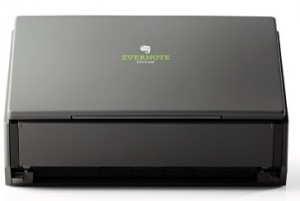 The ScanSnap Evernote Edition, which appears to be built on the chassis of the ScanSnap iX500, will retail for $495.

All of these products will be available through individual retailers, as well as through the Evernote Market, a new store inside the Evernote app that contains those products and other products that feature Evernote’s branding.