CreativeLive co-founder Chase Jarvis is giving a tour of his company’s spartan offices — tucked in a former photo studio on the cusp of Seattle’s burgeoning South Lake Union neighborhood — when he stops for a moment to catch a glimpse of a live recording about health and wellness in the main studio area.

A world-renowned photographer who co-founded CreativeLive in 2010 with entrepreneur Craig Swanson, Jarvis watches the dialogue for a few seconds before diving into the essence of his online education business.

There’s a compelling “texture” of live programming, a fabric that Jarvis says can’t be replicated by big online education rivals such as Lynda.com, Coursera or Khan Academy. “It’s a huge differentiator for us,” says Jarvis, adding that you can can turn on CreativeLive “just like TV and start watching.”

Some big-name investors seem to agree with that thesis. CreativeLive, a fast-growing online education company with operations split between Seattle and San Francisco, today is announcing a $21.5 million venture round led by Social+Capital Partnership with participation from existing investor Greylock Partners. That brings total funding to $29.5 million.

Sure, thing. And CreativeLive appears to be doing both.

At the epicenter of some big shifts in how people learn, Jarvis said that CreativeLive has a massive opportunity in front of, including the possibility to expand into the lifelong learning and continuing education space.

“We’ve been building a lot of infrastructure, and now we are poised to unleash the beast so to speak,” he said. “We have a big vision for the company.”

CreativeLive may not be a household name, at least not yet. But the 85-person company is on a rocket-ship trajectory, one of the reasons why venture capitalists were knocking on the doors when Jarvis and CEO Mika Salmi hit the financing path earlier this year. The statistics behind CreativeLive are impressive:

—More than two million students in over 200 countries have participated in a CreativeLive course.

—Those students have consumed over a billion minutes of content, with Jarvis noting that they now produce more live programming than “anybody but a 24-7 news channel.”

—Over 500 courses have been recorded since CreativeLive was founded, including a number of live broadcasts from remote locations. (Think, fly fishing instruction in the Montana wilderness).

Jarvis wants to dominate what he describes as “creative education” — the makers and doers in fields such as photography, video production, graphic design, business and health. 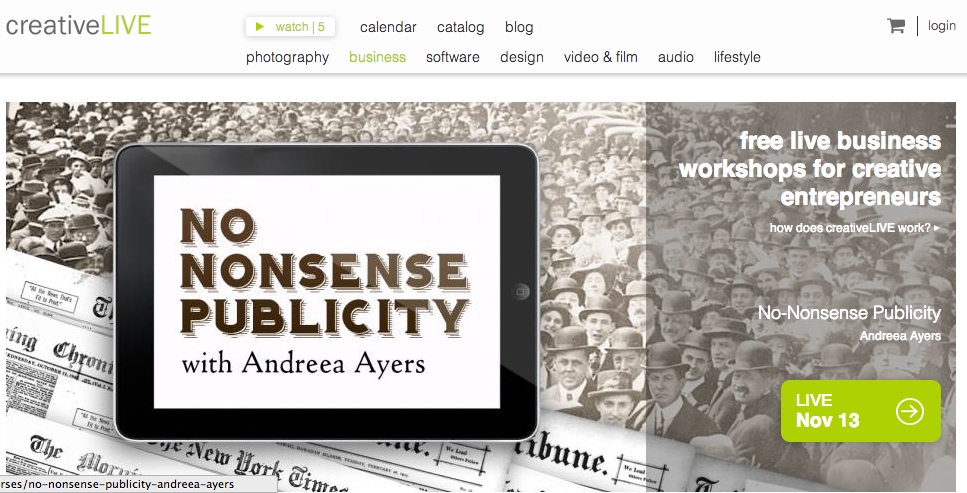 Similar courses can be found elsewhere online. But here’s what makes CreativeLive different. All of the courses are free to watch live, some of which have drawn tens of thousands of viewers.

The company makes its money be reselling the courses after they’ve aired, in-depth tutorials often led by best-selling authors, Pulitzer Prize winners or other top experts in their fields. Courses typically range from $29 to $199.

As Jarvis noted, live broadcasts — even when purchased and watched later — have a special energy. But they also come with challenges.

After all, live video is not easy to produce, hence the heavy-duty editing studios that resemble the TV station across the street. Furthermore, there’s another more basic limitation: time zones.

While a course is on live in San Francisco or Seattle at 4 p.m., folks in London or Madrid may be in bed.

Jarvis said they’ve been thinking a lot about that issue. And while he didn’t disclose any specific international expansion plans, he said they’ve got a “keen eye looking to the east.”

“The whole international landscape for us is really interesting,” said Jarvis, noting that most of the programs are now broadcast in English. “But we are not doing our job unless our core product is the best in the world, and being successful there is the most important thing.”

Right now, CreativeLive is laser-focused on selling its courses, but the company could also expand into other areas too. There’s the potential to sell products alongside the courses — perhaps photo equipment in a photo class — or incorporate product placements — say healthy foods in the fitness course.

“Fortunately, we have a ton of revenue streams that we’ve not unlocked,” Jarvis said. “But, again, we just want to focus on delivering the best product in the world.”

One potential bottleneck is piracy. After all, once a person downloads a full course, there’s nothing stopping them from circulating it to others. Jarvis said that’s not been a big problem to date, in part because of the large file sizes but also because those who purchase the classes derive great value from the instruction, and therefore aren’t inclined to transfer it.

“These are real skills that are transforming lives,” said Jarvis, adding that those sort of life-altering experiences build a strong community of users.

Jarvis declined to say how many of the online viewers end up purchasing the full class, but he said it is enough to “make sure everybody wins.”

CreativeLive pays instructors a percentage of revenue from the class downloads, with some instructors pulling in more than $100,000 for two or three-day workshops. Jarvis said the instructors — who he described as the life blood of CreativeLive — do it for more than the money.

“They are the rock stars,” he said.

With the new funds in place, CreativeLive plans to accelerate its growth by adding new courses and attracting even more world-class instructors. The Social+Capital Partnership may be a good ally in that realm, since it is led by former Facebook executive Chamath Palihapitiya, who helped grow the social network to one billion users.

“They are super focused on scalability and product growth. They are growth hackers at their core,” said Jarvis.

Editor’s note: CreativeLive is one of the Seattle 10, a list of the most-promising up-and-coming startups in the Seattle area. They will be recognized at the GeekWire Gala on Dec. 4th, with their business plan sketched on a giant 6-foot by 6-foot cocktail napkin and displayed at the Museum of History & Industry. GeekWire is proud to partner with MOHAI in presenting the Seattle 10, and we’ll have more details on each of the companies later this week.