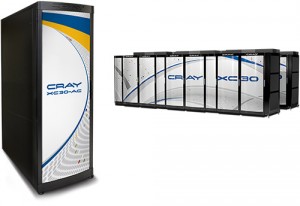 Supercomputer manufacturer Cray just announced a deal with the Engineering and Physical Sciences Research Council in Britain to install one of its XC30 supercomputers in Britain’s new national computing facility.

“One of our primary goals is to increase the ability of UK researchers to make valuable contributions to the solution of important, grand-challenge problems, and the Cray XC30 supercomputer will be a powerful tool in support of these efforts,” EPSRC Chief Executive David Delpy said in a press release.

The XC30, Cray’s most powerful supercomputer, will be installed in the ARCHER facility, a new high-performance computing center based out of the University of Edinburgh in Scotland. In addition, the company will be providing one of its Sonexion storage systems as well as service for its equipment. According to Cray’s press release, the contract will bring in $30 million in revenue for the Seattle-based supercomputer manufacturer.

The contract is good news for Cray, which reported a 7.6 million dollar net loss last quarter. Cray’s second quarter earnings report is due out next week.