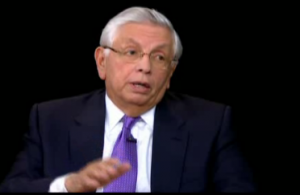 Appearing on PBS’ Charlie Rose Show Tuesday, Stern and Deputy Commissioner Adam Silver spoke briefly about how the NBA relocation committee unanimously voted Monday afternoon to block Seattle’s bid to buy the Sacramento Kings and bring the NBA back to the Emerald City.

An investment group led by the Microsoft CEO and Hansen, a hedge fund manager, already reached an agreement with the Maloof family (current owners) in January to buy 65 percent of the Kings for a reported $341 million.

But Sacramento came back with its own investment group and arena plan, and the NBA’s relocation committee believes that the Kings should stay in California.

Here’s what Stern said in regard to the Seattle/Sacramento issue:

And here’s what Silver said in regard to if running the NBA is different than any other corporation:

I think it is. I think it’s a public trust of sorts. And that’s how communities see their teams and we’re experiencing that in Sacramento right now. I think some people are surprised at the preliminary decision the relocation committee has made because they say well but look at Seattle – there’s more corporate headquarters, there’s more TV households, there’s the potential to generate more revenue there – shouldn’t you move a franchise to the market where there’s more revenue?  And our response is not necessarily. That if you look at total value over time, and brand building, and community support, that continuity is important. I mean, look (at) Seattle now. Part of why the citizens there are so upset, and we understand that, is they lost their team to Oklahoma City.

League owners will make an official vote May 13, but that’s expected to be a formality.

Monday’s recommendation was a seriously blow to Seattle’s chance of getting an NBA team this fall, as there may never be a better opportunity to get pro hoops back in this city, as Ballmer said last week.

But there’s still hope, at least according to Hansen, who penned a blog post late Monday night, writing that the Seattle group “has absolutely no plans to give up.”

Hansen has continued to move forward with his plans to build a SoDo arena.

You can watch the full video here. The Seattle/Sacramento topic conversation comes up at about the nine-minute mark.

Previously on GeekWire: How social media reacted to the Sonics news that left Ballmer ‘horribly disappointed’