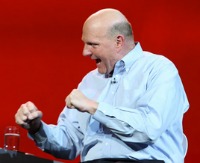 Albeit very little and not exactly groundbreaking, Steve Ballmer finally made some public comments about Seattle’s bid to bring the NBA back to Seattle.

Microsoft’s CEO is leading an investment group that is trying to buy the Sacramento Kings and move them to the Emerald City. Ballmer and Chris Hansen reached an agreement with the Maloof family (current owners) in January to buy 65 percent of the Kings for a reported $341 million, but NBA owners have yet to approve the deal.

Ballmer was attending today’s A PLUS Youth Program fundraising luncheon and here’s what he had to say:

“We’ve got our fingers crossed. Chris Hansen’s worked really, really hard, and, I think, really intelligently. Seattle’s got a great bid, we’ve got a great arena plan — I think we have the better arena plan. We’ve got a good offer, it’s been accepted by current owners, we’ve got a great market and it seems like there will never be a better opportunity. But it’ll be up to the NBA owners.”

You can watch Ballmer’s comments in the video above via our news partners KING5.

We’ll know soon where the Kings end up. Sacramento has an investment group that’s trying to block Seattle’s deal, which needs 23 out of 30 votes for approval by the NBA Board of Governors.

The NBA’s joint finance and relocation committee will meet Monday to make a recommendation to the Board on the proposed sale.

The final Board of Governors vote was originally planned for April 12, but that was delayed. Now, it’s looking like we’ll know if the NBA is coming back to Seattle by early May.

The Seattle group has already put down a $30 million non-refundable deposit and has requested for the team to play at KeyArena for two seasons before moving into the the new SoDo arena in 2015.