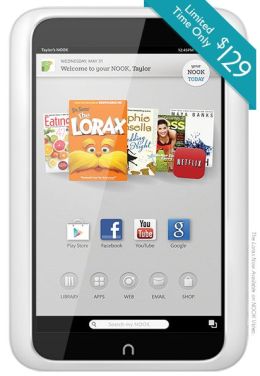 Father’s Day may be over, but that isn’t keeping Barnes & Noble from continuing its weekend sale.

The Nook was heavily discounted this past weekend, and today Barnes & Noble announced that the low prices will stick around for an unknown time. The Nook HD tablet is currently selling for $129 (previously at $199), while the Nook HD+ is at $149 (previously at $269).

Apparently the decision to extend the sale is to help prep you for summer reading.

“With the fantastic success of our Father’s Day promotion, we decided to extend the great prices on Nook HD and Nook HD+ to help our customers gear up for a great summer reading season,” Jamie Iannone, President of Nook Media, said in a press release. “In our stores and online, customers have embraced these beautifully designed, lightweight devices with stunning displays that offer great reading and entertainment content. We’re thrilled to keep in place our best prices ever and deliver great value to make reading more affordable.”

Here’s the problem: There may just not be enough customers embracing the Nook, which has struggled to gain tablet traction against Amazon’s Kindle, Apple’s iPad and Google’s Nexus.

Last month, the folks at 24/7 Wall St. put the Nook on its list of brands that will die in the next 18 months. The editors wrote that it has been “downhill” ever since the Microsoft invested $300 million in the Nook business last year with sales of the device declining by 26 percent in the most recent quarter and big losses adding up.

“The Nook’s disadvantage may have little to do with its hardware or software and more to do with size of its online audience,” 24/7 Wall St. wrote. “It competes against much larger e-commerce sites that have access to hundreds of millions of new readers. While Amazon has more than 130 million visitors a month according to Quantcast, Barnes & Noble has just over 6 million visitors.”

The original Nook was launched in 2009, while the HD versions debuted last year. Last week, Barnes & Noble ended support for its Nook apps for Macs, focusing instead on Windows 8, iOS, Android and its web app.