The print magazine business is in a bit of disarray, with titles pulling the plug nearly every month. But magazine publisher Meredith is not tossing in the towel on print, announcing today that it plans to launch a new title arounds its newly-acquired Allrecipes.com site this November.

The Wall Street Journal notes that it marks the first new magazine from Meredith in 15 years. 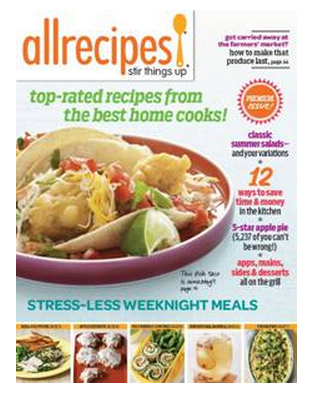 Based in Seattle, Allrecipes was acquired by Meredith last year for $175 million. The Web site attracts about 16 million visitors per month, and Meredith is shooting for a circulation of 500,000 with the print title. Editorial content in the recipe category is a bit easier to produce than in news or features, since much of it is user-generated.

The magazine will be edited by Cheryl Brown, who ran Gourmet magazine before it closed in 2009. In a press release, she noted that the magazine, which will be published six times per year, “will have a distinct voice and personality” that “will speak to real everyday cooks.”

“We’re big believers in print, and so far what we’re seeing is print continues to be the mode of choice for a lot of our female consumers,” Tom Harty, president of Meredith’s National Media Group, told the Journal. Meredith also publishes Better Homes and Gardens, Parents, Family Circle and Fitness