[Editor’s Note: Former Amazon manager Jason Merkoski, one of the early leaders of the company’s Kindle team, is the author of the new book Burning the Page: The Ebook Revolution and the Future of Reading. This excerpt is reprinted with permission.] 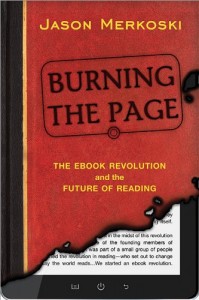 Ebook innovation is a game of cat and mouse. Unfortunately, one of the drawbacks of this game is that it becomes all-consuming—and innovation becomes harder to do when you’re trying to keep up with competition. When Apple launched a tablet, Amazon had to follow suit, even though it undoubtedly had other features on the drawing board, innovations that wouldn’t be launched until at least one other retailer had launched them.

I think some competition is healthy, because it forces an evolution­ary Darwinism of features: if a feature is successful, it will be copied. But untested features languish in unread business requirement docu­ments, and resources that would have gone into building those features get redirected into keeping up with the Joneses.

Amazon is winning the ebook revolution, but it may lose the war. Competitors like Barnes & Noble and Apple have successfully blurred the lines and proven that they can provide a great media experience, so Amazon’s brand matters less in the eyes of readers now. Any tactical advantage Amazon has is primarily related to its deep ties with publish­ers, ties that are much deeper than those of other retailers, except maybe Barnes & Noble.

The revolution started with one clunky, four-hundred-dollar device with four shades of gray that could only hold a hundred books, but the war is about all media now, about the convergence of books and audio and video. The war is on as different retailers compete for your atten­tion. Books were once hugely popular, but they have been relegated to a small slice of the media pie. And though book media is still a billion-dollar industry, it’s becoming outranked by TV and movies and audio and video games in per capita media consumption.

A 2010 Nielsen survey of American households showed that books account for only 3 percent of an average family’s monthly discretionary spending, while music accounts for 5 percent, video games 9 percent, and videos a whopping 29 percent. There’s no room for niche players to succeed at just selling books, which is why the digital retailers are getting into the game with all kinds of media. And now that ebook content is being sold at commodity prices, the true differentiator will ultimately be in the reading experience itself.

The winner of this war won’t be decided by generals with scale models of battleships and airplanes and tanks on a simulated table. No, it will be decided by designers, by user-interface artists, by people who connect to the humanistic spirit that flourished in the Renaissance as print books gained in popularity. The Renaissance saw the rise of read­able fonts, innovations in binding and page layout, and the placement of illustrations. And typographers always experiment, whether with the more lavish encrustations of the Art Nouveau period or the German grid style that emerged in modern times.

In the end, design matters.

Spend a weekend in Los Angeles, and then spend a weekend in Seattle, and ask yourself which city you’d rather live in. Seattle started out as a logging town and as a gateway to further riches in the Yukon.

Its roots are founded on the exploitation of resources, as if there’s an infinite supply of trees to chop or gold to mine. Historically, Seattle is a city that has drawn hard-core, hard-boiled businesspeople. That’s why you see the likes of Microsoft and Amazon and Boeing around Seattle. Frankly, it wasn’t the most auspicious place to start a venture that would revolutionize books.

Places like New York and Los Angeles are still rooted in the arts. New York has theater and publishing and advertising, and L.A. was founded on Hollywood, the movies. You don’t get that artistic sensibil­ity in Seattle, and you can tell by looking at the current Kindle and all the knockoffs that copy its design. Bullish as I am about ebooks, something is missing, and this flaw is perpetuated by the fact that all the e-readers are made in Silicon Valley. Apple, Amazon, and Barnes & Noble all have designers in Silicon Valley because that’s where the technical talent is. But what you don’t get with this technical talent is an artistic, book-oriented design.

As consumers and readers, we’re not dummies. We don’t want an impoverished reading experience. We don’t want a cracked plastic case and a blurry screen—which, sadly, is what many e-readers offered, especially in the boom years between 2007 and 2012 when everyone seemed to be trying to sell a budget e-reader. For good or for bad, we define ourselves in many ways by the gadgets we use and the clothes we wear. We don’t want to surround ourselves with cheap products. Nobody really aspires to that. We also don’t want to pay for a diamond-encrusted e-reader. We don’t need bling; we just need to feel like the design speaks to us. 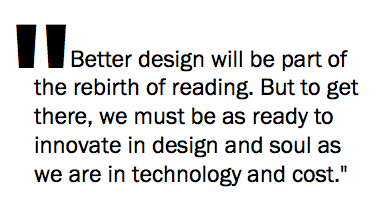 That’s the genius of print book covers. There’s a reason why print book covers evolved to a highly specialized, soulful art form. They add very little to the cost of a book, and yet they make reading a vibrant, colorful experience. When you think back to a book you’ve read, you’ll often remember the cover before you remember any words or ideas. As designers re-embrace the original strengths of print books, I think we’ll see more book-oriented themes in future e-readers.

Eventually, the line between print and digital will blur and finally vanish. Ebooks borrow from print books now, in terms of their design metaphors. They copy bookmarks and annotations, as well as the concepts of turning the page and of page numbers themselves—even though page numbers don’t even make sense in an ebook.

What’s a page number? What’s a page, if you can dynamically change the font size or the font? What’s a page, if you have a game embedded in the book and the game spans many levels? These design metaphors are yesteryear bolt-ons from physical to digital. But there’s an opportunity to reinvent the digital reading experience while keeping the best parts of print.

Companies with more humanistic sensibilities than Amazon will win the e-reader war by making the experience more human, more engaging. Children’s ebooks should be playful and adult ebooks thoughtful, soulful, or entertaining. Companies should create opportu­nities for interesting, unexpected experiences to happen. Perhaps digital insects scuttle across the page if you’ve had the book open for too long without turning the page. Perhaps in a thriller, as you read the ebook, you’re startled by the unexpected sound of a gunshot when you turn the page to a crucial passage. Though this can’t easily be done in hardware, you can create an engaging experience in software and make it soulful instead of awful.

Let’s face it: there’s still something emotionally bereft about a Nook or a Kindle. Perhaps over time the industrial design will become more human, more like the “illustrated primer” described in Neal Stephenson’s The Diamond Age. Or like the book Penny used in the Inspector Gadget TV series, a digital book with actual pages that could be turned. Better design will be part of the rebirth of reading. But to get there, we must be as ready to innovate in design and soul as we are in technology and cost.

This excerpt is from Burning the Page, by Jason Merkoski, published by Sourcebooks.