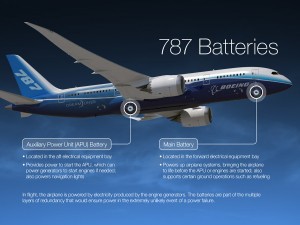 Thousands of miles away across the Pacific Ocean in Tokyo, Boeing executives will flesh out details on the proposed solution to the 787 battery issue in a live video webcast Thursday evening.

Boeing CEO Ray Conner and vice president Mike Sinnett are scheduled to speak at 6 p.m. You can watch the webcast here.

Much of that plan will be discussed tonight, but Boeing wrote about some of the details in a blog post:

1) We’ve improved design features of the battery to prevent faults from occurring and isolating any that do. That includes the addition of new thermal and electrical insulation materials and other changes.

2) We’ve enhanced production, operating and testing processes to ensure the highest levels of quality and performance of the battery and its components. That includes more stringent screening of battery cells prior to battery assembly. Operational improvements focus on tightening of the system’s voltage range.

3) In the unlikely event of a battery failure, we’ve introduced a new enclosure system that will keep any level of battery overheating from affecting the airplane or being noticed by passengers. A key feature ensures that no fire can develop in the enclosure or in the battery.

After a flurry of lithium-ion battery problems and emergency landings in Japan, the Federal Aviation Administration in January ordered all U.S.-based airlines to ground Boeing 787 Dreamliners until it’s proven that the batteries are safe and in compliance.

Having the announcement in Japan makes sense — nearly half of the 787’s grounded since January are from Japanese airlines and the battery maker is based in Japan.