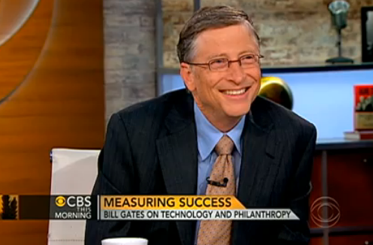 Microsoft co-founder Bill Gates stopped by the Washington Post today and spoke about his support for addressing the threats of cybersecurity.

Coincidentally, Gates today became the latest celebrity to have his credit card, social security and other information posted online as part of an ongoing celebrity doxxing fiasco.

Gates’ SSN, date of birth, address and credit card info were posted to a mysterious website that has been publishing the personal data of various celebrities from Michelle Obama to Tiger Woods.

The hackers seem to be pulling data from one of three big credit reporting companies: Experian, Equifax or TransUnion.

“We should not be surprised that if we’ve got hackers that want to dig in and have a lot of resources, that they can access this information,” Obama told ABC News. “Again, not sure how accurate but … you’ve got websites out there that tell people’s credit card info. That’s how sophisticated they are.”

Previously on GeekWire: Bill Gates at SXSWedu: The future of education is data