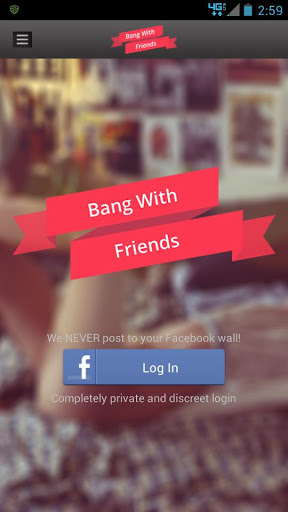 The two companies reached an agreement today, with a Zynga spokesperson telling AllThingsD that Bang With Friends will be “changing its name and rebranding its services,” as part of the deal.

Back in July, Zynga sued Bang With Friends (BWF), an app that lets you find Facebook friends who are equally interested in having sexual relations, over the “With Friends,” part of its company name.

The game-maker claimed that BWF founders Colin Hodge and Omri Mor “named the product … to leverage and deliberately trade on the fame of Zynga’s WITH FRIENDS family of marks in order to get noticed quickly in the sea of Internet applications.”

Hodge told us that he’s happy with the ruling.

“We’re very pleased to have an amicable agreement in this matter, and we’re especially happy to be able to focus on our kick ass next version of BWF,” he said. “It’s coming soon and it’s damn sexy.”

Though BangWithFriends.com is still up and running, BWF has already created the next version Hodge is referring to: “The Next Bang.” Hodge said that it will be the destination to being introducing users to his company’s new app and brand.

“The next version of Bang With Friends will continue the same honest & simple approach that our users love, and keeps our cheeky & humorous approach,” he said.

The BWF team doesn’t appear to be slowing down despite the suit and is now hiring a lead developer. On the job posting, note that a listed investor in BWF is Tim Draper of Draper Fisher Jurvetson.

The Zynga suit isn’t the first hurdle the folks behind BWF have had to clear. Apple refused to allow the BWF app into the App Store, citing clause 16.1, which does not allow for apps with ”excessively objectionable or crude content.” About a month ago, BWF returned to Apple’s App Store under a new moniker of “Down.”

Hodge launched the original app in January with Mor, a University of Washington graduate who grew up in Seattle and spoke at the launch of StartupSeattle. Both lived in the Emerald City, but moved down to San Francisco this past spring to the Boost Incubator.

Editor’s note: This story was updated at 2:05 p.m. with comments from Hodge.