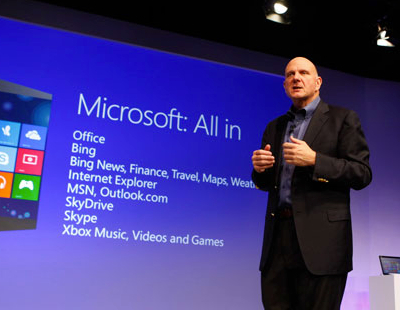 To fully grasp the significance of Steve Ballmer’s retirement announcement, first go back to 2008, when the Microsoft CEO told an audience in Washington, D.C., that he planned to remain at the company for another nine or 10 years, until his last kid went to college. In other words, he planned to retire in 2017 or 2018.

Then fast-forward to last month, when Ballmer unveiled a massive restructuring that reshaped the company around a new vision, focused on devices and services, with himself and a core executive team at the center of a new “One Microsoft.”

And then last Friday morning, Ballmer surprised everyone — including many people inside the company — with the news that he would retire within 12 months. “There is never a perfect time for this type of transition, but now is the right time,” he told employees in his memo announcing the decision.

Something here doesn’t add up. I spent much of the weekend talking with current and former Microsoft executives and employees, and as the shock over Ballmer’s announcement starts to wear off, more of them are starting to question the timing of his decision, and the real motivation for his departure.

One theory is that ValueAct Capital’s push for reform played a role in Ballmer’s decision. The activist investment firm has been accumulating Microsoft shares, and pushing for a board seat, raising the possibility of a proxy battle that could undermine Ballmer’s position as the company’s leader. Ballmer, for the record, told the Seattle Times in an interview that his retirement “has nothing to do with that.”

Another theory involves Nokia. Microsoft has reportedly been in on-again, off-again acquisition talks with its smartphone partner, and Ballmer’s departure could clear the way for such a deal, potentially with Nokia CEO Stephen Elop taking command of the combined company.

What role did Bill Gates play? Kara Swisher of AllThingsD, also suggesting that there’s more to this than Microsoft is saying, points to evidence including the lukewarm statement from Gates in the official Microsoft announcement, and Ballmer’s lack of acknowledgement of the Microsoft chairman (and his longtime friend) in his memo to employees.

The biggest head-scratcher is the timing of the announcement in the context of Microsoft’s massive reorg. Ballmer is often compared to a football coach. To extend the analogy to this situation, he spent months assembling a new team, came up with a radical new gameplan, and then abruptly announced his plan to walk off the field.

Ballmer wrote in his memo last week, “My original thoughts on timing would have had my retirement happen in the middle of our transformation to a devices and services company.” He added that Microsoft needs someone “who will be here longer term for this new direction.” Based on his previous comments, signaling that he planned to stay until at least 2017, that statement implies that Microsoft’s transformation will take many years.

Ballmer told Mary Jo Foley of ZDNet that his decision to retire was made independent of the reorg process, after the reorg was done.

But it’s tough to understand why Ballmer would come up with a new plan and team, and then voluntarily hand it over to someone else to implement. In an ideal world, any new CEO would have the prerogative to evaluate the corporate structure and change it as he or she sees fit. That seems to make the entire reorg meaningless, or at least temporary.

Or if the board insists the new structure and leadership remain in place, it will severely limit the authority and flexibility of the new CEO in a way that would reduce the pool of quality candidates. No one worth their salt would try to lead a company of Microsoft’s size with their hands tied.

Software developer Guy English has an interesting post on this topic, titled Ballmer’s Straight Jacket. “Microsoft is currently searching for a new CEO who’ll fit the straight jacket Steve Ballmer has left behind,” he writes. “If you’re going to change leadership I suggest it’s a good idea to let the new leader figure out how to best run things. You don’t see outgoing national leaders being able to appoint the incoming cabinet. That looks like what Ballmer has just done.”

One Microsoft person close to the process disagrees with this whole line of reasoning, telling me in an email exchange over the weekend that there’s no debate among the board or senior management about the strategy, that everyone is behind it. To delay the new strategy in the fast-moving tech industry would be irresponsible, this person says.

There’s no doubt that the company can’t afford to fall further behind in the fast-moving tech industry. But the timing of Ballmer’s decision itself seems to put the company in limbo. Will people at Microsoft really embrace and implement the new structure and leadership with a CEO transition pending?

Ballmer is right that there’s never a perfect time for a decision like this. But it’s hard to escape the conclusion that the timing of his decision is odd.