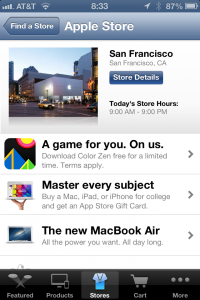 If you’re hunting for a new game this weekend, Apple can hook you up for free through its Apple Store app.

Color Zen, a puzzle game that’s typically 99 cents, is available for free through a promotion in Apple’s retail store app for a limited time.

To get your app, go to the stores tab at the bottom, and then tap on your local Apple Store, and the promotion should be the first item on the screen.

The one thing that’s a bit odd about the system is how clunky the implementation is. Once you tap the “Download now for free” button, you’ll be taken to the App Store, where you’re presented with a pre-filled promo code redemption screen. Redeem the code, and your download will begin, but it seems funny that Apple has to resort to doing that on its own platform.

While Apple hasn’t officially said anything about the future of any deals, 9to5 Mac says the offers will change weekly, and include other digital items like iBooks and iTunes media.

This move would seem to indicate that Apple is looking to boost the performance of its retail stores, which have seen a slight dip in revenue in the past year. Whether or not this new promotion drives more people to the company’s stores remains to be seen.

The promotion also follows Amazon’s longtime efforts of giving away a free Android app every day, promoting its app store.

Apple was not available for comment. We’ll update it if we hear back from them.